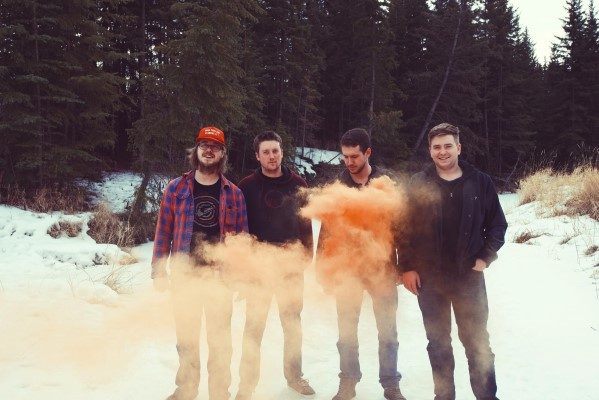 Edmonton, AB’s SHAG released their debut album, Thursday Night Special on June 7, 2018. The band had a chat with us for our newest segment of Five Questions With, so take a few moments and find out more about them below.

We are SHAG from Edmonton, AB but originally all the members are from a small Alberta town called Kitscoty. All the members of the band grew up there and went to school together since we were all very young, but didn’t actually start a band until we were all in university and college for some reason. Zack plays guitar and is the lead singer, Jess plays lead guitar and all the face melting guitar solos, Trevor plays the drums and sings too and Travis plays bass and once and awhile pitches in a backup vocal. We just released our first LP called “Thursday Night Special” and it can be found on all the major streaming services and can be bought on iTunes and Bandcamp.

Our music would be best defined as alternative rock music, but we weave a bunch of our own personal influences into our sound. Our sound is a little bit of an older 70’s rock sound mixed
with the grunge of the 90’s. We’ve also mixed in some punk sounds that lead to most of our songs being quite upbeat and riff-heavy. Our writing style in the early days was very dependent on Zack, haha. He would basically write a song and then the rest of us would add some of our own parts and boom we got a new tune. More recently though and for the writing of our new
album, we tried to focus on building catchy riffs together first, so Jess and Zack would bounce riffs off each other until they found cool guitar tracks and then Travis and Trevor would add the bass and drums to make a full sound. We flesh out the whole skeleton and structure of the song first instrumentally and then all sit down and write lyrics together. It is a very collaborative process!

Yes! We are playing at the Bro-Tel Backyard Festival in Derwent, AB on August 18th! We are super excited to play at this festival for the first time. We have had lots of other bands we are
friends with go out to play this festival and have nothing but good things to say about it! We make sure our tunes are tight for our live performance, making sure we’ve practiced the set a lot before the event and have as balanced a set list as we can. There is a lot of shared singing in SHAG, Zack does the majority of it, but Trevor sings a couple songs, so does Travis and even Jess sings one every once and a while, so we like to mix it up on stage. At a live show, you will always see Trevor making goofy faces while he is drumming and we try to make a laid back, fun environment for everyone.

Our lead single from our new album called “Do Better”! It’s a great place to get introduced to SHAG. It was one of the first we wrote for the album and we all contributed to this one in terms of lyrics and songwriting. It really came together in the jam space and was a very organic experience for the band writing it and we think it turned out really great. Also, Jess’ guitar riffs in the choruses are awesome!