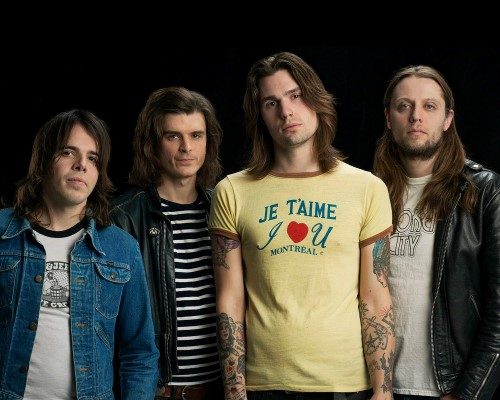 Montreal, QC-based rock band Sick Things recently released a video for their single, “Sick Things” which is off of their debut self-titled album. The album was released on July 6, 2018, so be sure to check that out, and find out more about Sick Things in our Five Questions With segment below.

I’m Cameron from Sick Things, a powerpop-rock band from Montréal.

We play non-threatening, inclusive rock music with a focus on big choruses and trying to make people dance and tap their feet. Our approach has always been to make music that we love to listen to and to not alienate the audience. Tough guy rock music isn’t our bag, we want you to participate in singing along and having as much fun as we are. I like writing songs where every part is competing for the chorus, and throwing in exciting little parts to make the listener hit repeat at the end.

We will be playing Beau’s Oktoberfest September 22nd, and a few dates in southern Ontario as well as Québec in the fall. There are a few other shows but I’m not allowed to announce them yet so you’ll have to stay tuned and check our social media for updates. As for the live element, I would say it’s relentless display of bad dancing, smiles and love. From the first note to the last, we take a lot of pride in playing our hearts out, and then we put strength in the final blow, so to speak. Lot’s of energy, to say the least.

I would say “We Got It Figured Out”. I think it’s our best representation of the styles of music we like, and a blend of all of the types of songs you’ll hear on the album. It’s also the first song I sent to the band when we were putting the project together so it holds a sentimental place in my heart.

Ooof. How much time have you got? I’ll try and be concise and just list a mix of all time faves and current obsessions, in no particular order. Dead Quiet, Public Animal, Pale Lips, Feist, Sloan, Sam Coffey & the Iron Lungs, The Sadies, Kandle, Zeus, Tricky Woo, Cursed, Pride Tiger, Priestess, Bison, really there are way too many to name. We’re blessed to have so much talent in this country, it’s really remarkable.