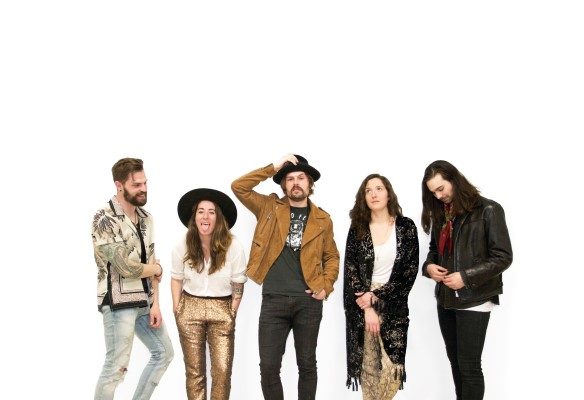 Montreal, QC’s Guidestones are a folk-inspired rock sextet who have recently released a brand new single, “Ground Control” along with accompanying music video. The single is off the band’s upcoming album, Keeps Me Up and is the perfect example of the perfect soundtrack to summer. Check out the video below, and if you can catch these guys live in a town near you, it would be highly recommended. Check out tour dates HERE.

Hello readers! We are Guidestones. We’re a band from Montreal, Canada often described as alternative indie rock with a pinch of classic rock.

We combine elements and aspects from our favourite 70’s and 80’s bands but we are very inspired by the current social climate as well, along with our own growing pains throughout our lives.  For this new album (and this new single) we tried to bottle that feeling we used to get as kids driving in the car while your parents blasted some Bryan Adams. That vibey sunshine-rock, mixed in with a life lesson learned throughout each song. We aim to have a look at life and all the fun (and not so fun) stuff that comes with it.   The writing process for us is extremely natural, where everyone has their own unique role(s). For instance, Gabrielle is an idea machine. She usually punches out the basic chord patterns and melodic ideas, then we refine the ideas with the rest of the band. Lyrically, Gab and Ryan write the majority, while Zander (our Drummer), helps add the final touches to polish off the idea. Then the rest of the team chimes in with their own unique element(s) to add.

We have a few dates coming up, including an outdoor show with ‘The Damn Truth’ in Huntingdon on August 11th that we’re really excited for. We also have a show at Quai des Brumes on August 16th, DesBouleaux Fest 2018 on August 18th and A show at Verre Bouteille on September 1st in Montreal.

We aim for our live performance to be a fun party…a celebration really.  We aim to put on a performance rather than just a show where people can watch us play. We always have the best time when performing and that is where we feel most at home. We just want to convey and spread that feeling to all those watching…having FUN is the key.

Playing music is very much a privilege. We’re thankful every time we get to perform so we make the most of it and try to make sure everyone there leaves with a smile on their face and really just enjoyed their time.

Definitely the latest single “Ground Control”. It was chosen as the first single because it does a great job of encapsulating the vibe of the upcoming album (introspection, fun, dark moments with a positive life lesson). It represents who we are and what we’re all about more than any other song we’ve made.

Man, Canada is just pumping out top-notch rock music lately. ‘The Damn Truth’ out of our hometown of Montreal has been on a real tear. They kick so much ass live and we really look up to them. They are definitely a must see! The drummer of the band (Dave Traina) actually produced our new record and he’s also just the best guy ever. ‘Royal Tusk’ are an amazing band from Edmonton we’ve had the chance to play with.  Also, if you haven’t heard of ‘Sun K’, do check them out! They rule and even let us crash on their couch last time we played in Toronto.