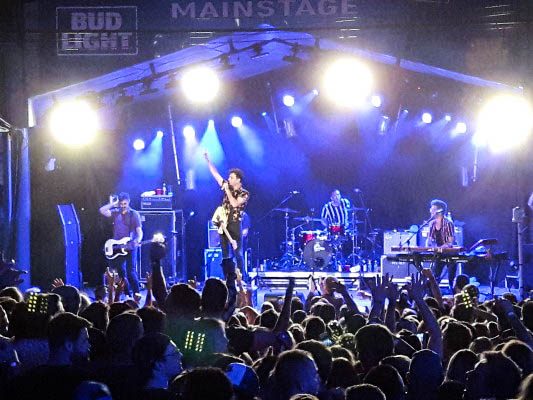 Each year the George Street Festival draws crowds from all over who want to experience the iconic George Street to its fullest. This week-long event offers something for both young and old, with many genres of music included. This night was no different.

Night five of the festival began with Newfoundland’s own Fairgale. Fairgale is Andrew Rodgers (guitar, vocals), Stephen Green (guitar, keys, vocals), Brad Tuck (drums, vocals), and Gary Powers (bass). This group of talented individuals have been a part of the local scene for a few years and have seen great success. This isn’t their first GSF, as they won the inaugural #RockTheBlock competition in 2015 which earned them the opportunity to open for Trooper at the festival that year. This isn’t even their first night on stage for this year’s festival, as Trooper played once again and invited them on stage for their rendition of ‘Here for a Good Time’ (which they again played as cover during their own set). Fairgale played a number of crowd-pleasers such as ‘Sleepwalking’ and “Tunnel Vision” (the first single from the release of their second album Pillars earlier this year). During “Walk on Water”, another track from their recent album, Rodgers call Nick Earle (from the national award-winning duo of Earle and Coffin) to join them on stage where the pair duelled it out on guitar riffs that left the audience in awe. They ended their set with their current single “Bad Reputation”, which left the crowd wanting more. If you ever get the opportunity to see them perform live, do it!

Next Dear Rouge graced the stage. Hailing from British Columbia, Dear Rouge consists of Drew and Danielle McTaggart, partners in life and art. The pair quit their day jobs to focus on music full time and have been on a whirlwind adventure ever since. Awarded a 2016 Juno for Breakthrough Group of the Year, the band released their latest album Phases earlier this year. This album is described by the duo as “a document of both the emotional depths [the pair] plumbed to come up with unflinchingly personal, honest material, and the ground they covered in their efforts to push themselves sonically and aesthetically.” This first thing I noticed about this band was the otherworldly melody that was performed as they made their grand entrance. Accompanied by additional musicians, the duo began their set with “Modern Shakedown”. One thing that I noticed right away was the influence of theatrics, as Danielle manoeuvred the stage. Next was their most current single, “Live Through The Night”, a song that kept the audience moving. The duo finished with ‘Boys & Blondes’, a song that is considered to be “a sly anthem of feminist empowerment.” Towards the end of the song, Danielle surprised the fans and walked through the audience, stopping in the middle of Prince Edward Plaza before returned to stage for the final outro. This may have been their first performance in Newfoundland but they did not disappoint.

Finally, the headliners for the night were the Arkells (Max Kerman, Mike DeAngelis, Nick Dika, Tim Oxford, and Anthony Carone). Hailing from Hamilton, Ontario, the Arkells entered the scene during the mid-2000s. Releases such as 2011’s Michigan Left and 2014’s High Noon have achieved some national success. These individuals have proven that there is still a place for passionate rock ‘n’ soul in the mainstream, with them being one of the most-played band on Canadian alt-rock radio. The Arkells started their set with “Knocking at the Door”, a song that received cheers from the audience as they sang along. One thing I noticed about The Arkells the first time I saw them perform live (George Street Festival a few years back), was their amazing interaction with the audience. Keeping with some of the same gimmicks that the audience love, Kerman asked the audience if there were any guitar players there. Keeping in mind previous shows, one lucky fan named Ryan came prepared with a sign that stated he played guitar, He was quickly ushered to the stage, where he rocked out to the end of the song. This wasn’t the only time during the night that a sign caught Kerman’s attention. A member of the audience was holding a sign that said ‘giddy up’ on one side and ‘Play Abigail’ (a track from 2008’s Jackson Square album) on the other. Kerman agreed to play one verse for him and told the audience that persistence pays off. They played some fan favourites such as “11:11” and “Savannah”, which caused George Street to erupt into a massive singalong. A stand out of the night for me was “People’s Champ”. Before performing this song, Kerman disappeared from the stage for a minute which I found confusing. When he returned, he was accompanied by Hasan Hai. Hasan Hai is the founder of the Newfoundland and Labrador Beard & Moustache Club, a club that gives back to the community. One fundraiser, the merb’ys calendar, became known throughout the world. Kerman presented him with “People’s Champ” medal. I cannot think of a more deserving person to receive it. And this only solidifies the fact that the Arkells are a pretty awesome group of individuals as well.

The stage presence of the Arkells is one that I love to see. Each member of the band seems like they want to be there. Seeing the smiles on their face as the crowds sing along, cheer, and ask for more is worth the price of admission. Their banter on stage, as well as each guy being given their turn in the spotlight to show their talents, show their close bond. You can see how easy going each guy is through the banter between Kerman and Carone. Mentioning Carone recently becoming a Dad, Kerman related a ‘story’ about asking what lullaby he sang to the baby. After shooting down a few suggestions, Carone went into a jaw-dropping performance of “Great Balls of Fire” by Jerry Lee Lewis on the keys. He is definitely the only keyboardist of his calibre, foot movement and all!

The Arkells finished up their set with “Leather Jacket” as the masses chanted for more. True to their fashion, the Arkells came back for more and invited Dear Rouge to share the stage. Here they performed “I Wanna Dance With Somebody” by Whitney Houston. Sharing lead vocals, Kerman and McTaggart rocked the stage as the fans cheered them on. They ended the night with “My Heart’s Always Yours”, as they made promises about coming back to Newfoundland again – and with new music!

The Arkells never disappoint and don’t worry, we will always keep in mind the three rules to attending an Arkells show: 1) You gotta dance, 2) you gotta look after each other, and 3) you gotta sing. I’ll definitely be singing these tunes to myself until the next time they are in town.