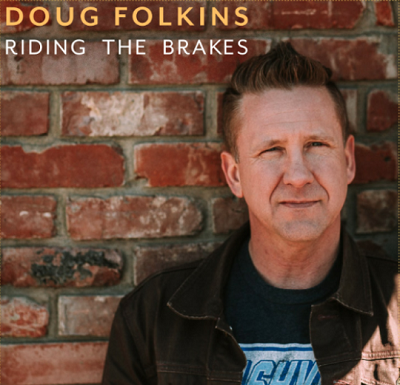 August 1, 2018, singer/songwriter Doug Folkins released his first Country EP titled Riding The Brakes. Having given focus to his songwriting over the past several years, he believed he was ready to show the world some of his favourite Country tunes. In the past, he has released six independent CD’s in other genres.

Riding The Brakes is a collection of six tracks, co-produced by Folkins and Anthony Fiddler and features the musical talents of Ryan Stead, Kyla Rawlins, Jeff Johnson, Kim Schmid, Fiddler and Folkins. From the most rockin’ song “Wait On The Weekend”, to the cruising tunes like “Riding The Breaks” and “Ain’t Just Saying That” to the slower tempo “Medicine Road”, “Ride It Out” and “No Good At Goodbyes”, this album will take you on a musical journey with its melodic stories.

Folkins has an impressive songwriting career. He is signed to Nashville publisher Lynn Gann Music Enterprises and has had over 43 songs recorded by artists in the US and Canada, including 17 radio singles and multiple song placements on CNN, OWN, and National Geographic Channel programs.

In this interview, we find out about the new EP, some of the familiar artists he has worked with and shares some special stories.