By Shayla Obrigewitsch on August 1, 2018 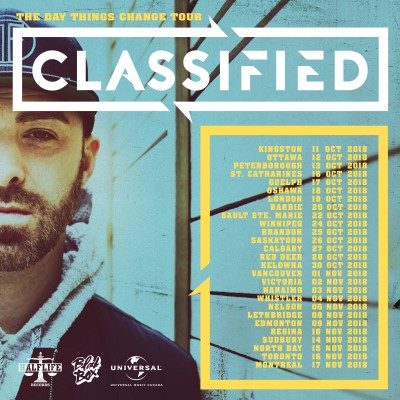 Earlier this week, multi-platinum Nova Scotian hip-hop artist and producer Classified (Luke Boyd) announced he will be embarking on a 27-date headlining Canadian tour. The Day Things Change Tour is in support of his latest EP release—Tomorrow Could Be…, and has shows scheduled from British Columbia to Quebec. The tour kicks off on October 11th in Kingston, ON and goes west across Canada and back, and finishes up in Montreal, QC on November 17th. Classified will be performing old and new songs, and to quote him, will be “bringing that classic East Coast party to the rest of Canada!”

Tickets are on sale as of August 1st at 10 a.m. local time. Check out the dates listed below. More information on shows and links to tickets are available on Classified’s website.

To go along with the tour announcement, Classified also released his new video for his EP opener “Damn Right.” “Damn Right” was directed by his brother Mike Boyd, and was shot in just two hours. The house featured in the video was found on their way to PEI for a show. Check out the video below.