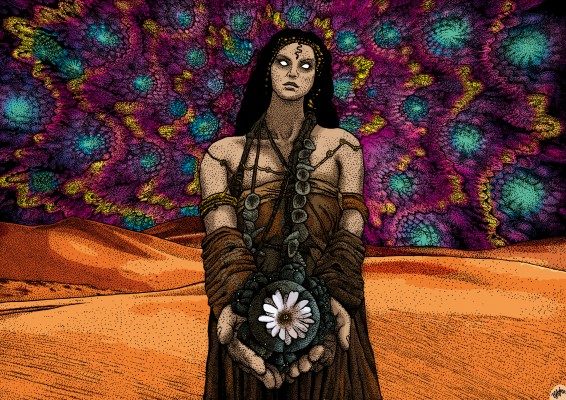 A woman stands amongst sand dunes and a sky that is adorned with kaleidoscopic vortexes. With extended arms, she beckons you into the psychedelic world of Cleõphüzz.  Although stunning, Wizard of Phuzz’s cover is not its only intriguing aspect. Coming from Temiscamingue, Cleophuzz is a “psychedelic stoner rock band”.  Their debut EP is comprised for four head spinning tracks that boast a very desert-like, psychedelic vibe. Ruled by heavy, fuzzy guitars these seemingly never-ending tracks will leave you in a daze – in the best way possible of course!

Opening up the EP is “Sandstorm”. Its heavy sound, accompanied by eagle screeches and the rattling of a Rattle Snake’s tale, sets the stage for – if you hadn’t guessed already – the desert. The track sounds almost spacey as if lost in one of the vortexes depicted on the EP’s cover. True to its name, it builds up much like a sandstorm with a massive explosion of sound. The explosive drums work together with fuzzy guitars to create a sort of whirling effect. Not once does this seven-minute track lose its audience – you’ll be engaged throughout, trust me.

Next up is “Mirage”, which, at five minutes, is the shortest track on the EP. It continues more or less in the same vein of the previous track by setting a moody tone only into explode into a crescendo of loud guitars. However, this time the instruments are accompanied by gargling vocals, thus evoking a very ‘90s grunge sound.

“Half Moon Ritual” is the longest track on the EP at nine minutes, and is definitely the most hypnotic. Its moody cello and sensual sitar will leave you in a trance. The track seems to wander on forever, teasing and beckoning you as it plays on.

“Walk of Shame” closes off the EP with its thumping drums and spiralling guitars. This track makes it pretty clear that Cleophuzz’s live shows must be very intense and super fun. As the guitars get louder, egged on by those raspy vocals, you can pretty much picture a scene of madness in the mosh pit.

Desert-rock is a very apt description of this genre of music. Wizard of Phuzz is a rather unique EP, with two (intense) purely instrumental tracks, and two (just as intense) tracks with vocals. Each song on the EP is appropriately named as it evokes feelings of being caught in a devils dance, or evokes mirages, or sets you in a trance. Wizard of Phuzz is quite a wild ride from start to finish and definitely restores faith in modern rock and roll.