Home / Promos / Tim Hicks, multi-platinum country music star, is about to GET LOUD this November

Tim Hicks, multi-platinum country music star, is about to GET LOUD this November 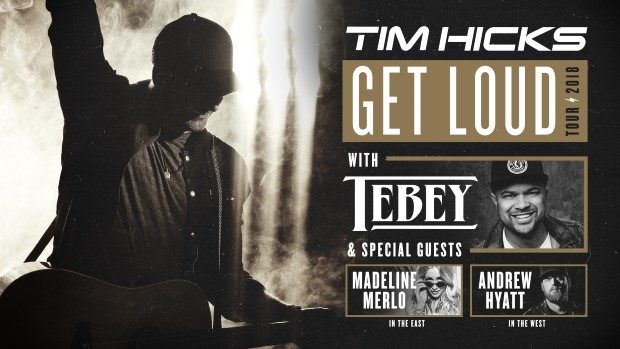 Tim Hicks, who is a CCMA 2018 Apple Music Fans’ Choice Award nominee and multi-platinum, award-winning entertainer, will be touring across Canada on his “Get Loud Tour” kicking off in Toronto, Ontario, on November 1. Hicks along with special guests Tebey, Madeline Merlo (in the East), Andrew Hyatt (in the West), and Washboard Union (Toronto only), will take their energy-charged tour across Canada for the month of November. Additional dates in Nova Scotia and New Brunswick are still to be announced.

Tickets are on sale to the public now and for the “Get Loud Tour” Hicks has partnered with PLUS1 so that $1.00 from every ticket will go to Unison Fund and their work providing counselling and emergency relief services to the Canadian music community.

With the recent release of his fourth studio album, New Tattoo, a bold compilation of 12 tracks that is a “catapult between traditional country grooves, stadium-sized rock riffs and blue-collar country,” Hicks is on his way to having an exceptional summer and fall. He’s ready to party and cause a bit of trouble along the way!

And, it’s Tim Hicks so this tour – it’s going to be loud! Get ready to let loose and enjoy the show.

PLUS1 is a turnkey initiative for artists to address a cause effectively, raise and grant money towards a cause they connect with, while being well informed at no cost. By using the natural convening power of concerts, fans will be organically engaged with the artist’s message beyond the music, helping to make more people socially aware and active participants in the world’s most pressing issues.

Unison Benevolent Fund is a non-profit, registered charity that provides counseling and emergency relief services to the Canadian music community. We are here to help professional music makers in times of hardship, illness or economic difficulties.