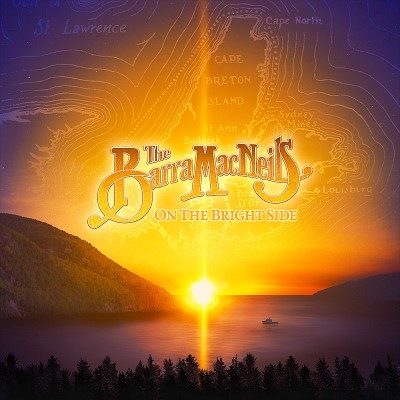 For over 30 years, The Barra MacNeils have been travelling and spreading their music throughout the world. With the recent release of On The Bright Side, an upbeat album with catchy tunes and a little something for everyone, they’ll embark on tour in August and throughout the fall.

The first track on the album, “Welcome To Boston”, begins with a strong emphasis on the fiddle and step-dancing. This is definitely a track that will make you want to dance or clap along to the catchy melody. It is strictly melody based with no vocals, adding a unique touch to the beginning of the album. ‘Mademoiselle Gallant’ follows a similar pattern, yet reminds me of something you’d hear during a choreographed ball scene in a film.

“Jug of Punch” has a strong Celtic feel to it. The vocals blend nicely together with the storytelling feel of the track. ‘The Underachiever’ has the same feel but with a unique touch, the removal of instruments. This track is simply one using vocals. The harmonies used during the choruses add the finishing touch to this catchy tune.

“Living the Dream” was released as the band’s first single. Through this song, The Barra MacNeils are singing about what some would consider to be living the dream and having many things right at your disposal and a home to call your own. This is a catchy tune, which definitely highlights the talents and creativity of the group.

Keeping with the theme of talent and creatively, The Barra MacNeils add a little something for everyone to this album. “Ribhinn Donn”, a track with a softer melody and emotional vocals, leave a melancholy atmosphere that tugs on your heartstrings. A unique feature about this track is the fact that it is sung by Lucy, entirely in Gaelic.

“Daisy” is described as a track with a “catchy melody, beautifully sung by the incomparable Lucy MacNeil, seeks to explain the dangers of our current world to a younger, pure-hearted individual.” This is definitely a stand out from the album for me. The musical arrangement is much different than other tracks, with a strong emphasis on the piano as it comes to the forefront of the melody. Another stand out is ‘Clouds Under My Feet’. Not only is the melody and instrument used different, but the vocals are sung in a way that is different from what we’d expect when hearing they are a Celtic band.

“The Way Old Friends Do” focuses on vocal harmonies, as they sing about the strength of friendship and how we can tackle anything that is sent our way with the support of friends. We are never alone.

The last track on the album, “Saratoga”, is another track where the fiddle is prominent throughout. As seen on the first track of the album no vocals are added, just a catchy melody to keep the audience entranced and wanting more.

Dubbed as Canada’s Celtic ambassadors, The Barra MacNeils are sure to entertain both young and old with their eclectic array of music. Definitely check them out if they are in your area!