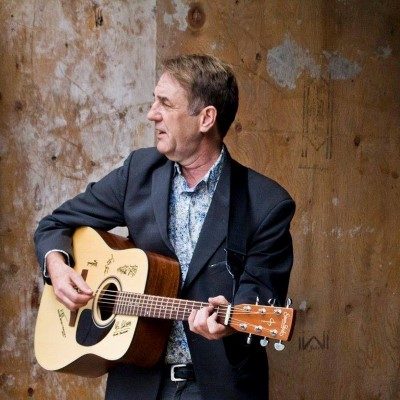 Juno Award-winning artist Fergus Hambleton has released a video for his newest single, “Slow Fade Into Black”. You may recognize Fergus as the lead singer of the reggae band, The Sattalites. The song was written for the bands’ keyboard player, the late Bruce Robinson.

We had a chat with Fergus during our newest segment of Five Questions With and we think you’ll enjoy finding out more about this talented Canadian artist.

Check out the video below, and be sure to check on his socials for any updates that come along.

Care to introduce yourself to our readers

I am a musician/songwriter from Toronto Canada and have been writing, performing and recording music since the 1960s. Along the way, I have recorded 6 solo albums and 6 albums with The Sattalites, a pop-reggae band.

I have written and performed in many different styles, from folk, reggae, jazz and rock and this is definitely reflected in my songwriting.

What is the meaning behind “Slow Fade Into Black”?

The song was originally written as a tribute to my friend and bandmate in The Sattalites Bruce “Preacher” Robinson. He had pancreatic cancer and I was inspired by the dignity and clarity with which he met his death.

We shared a lot together over the years and I wanted the song to reflect his positive and generous spirit.

I’ve always loved a wide variety of music and was extremely lucky to grow up in an era of incredible musical richness. I was influenced by many different things, (my first major love was Fats Waller), but of course, fell under the spell of the Beatles and the other songwriters that blossomed in that incredible time. I feel that I have learned valuable things from all the different kinds of music I have played over the years, the ensemble discipline of many of the roots musics, the attention to detail of the “American Songbook” writers, the harmonic openness and eagerness of jazz and the history and storytelling of folk. For me still, it comes down to a perfect melding of emotion with well thought out musical and lyrical ideas.

I play in a number of different situations…firstly I often play acoustic shows at some Toronto spots like Sauce and Amicos…I also have an acoustic singing trio called Wood And Water which is reggae and soul done acoustically….we play some concerts and house parties…next date is at The Tranzac Club in Toronto on July 24th at 7:30.

And for the past 15 years, we have played reggae every Tuesday night at The Orbit Room.

“Slow Fade Into Black” is the first track from a new EP which will be released September 2018. The other tracks are currently being mixed by Terry Brown ( Rush ). The new music is a little more acoustic in feel and features some beautiful ensemble singing as well as some stellar musicianship from George Koller Ed Hanley and John Adames. All originals but there is one song that’s 300 years old!