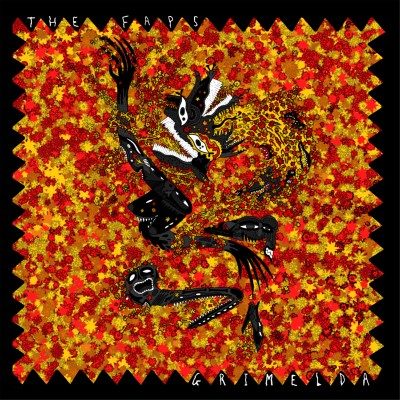 Punk bars have a smell all their own. If you have ever been to any punk bar anywhere you will be met by an olfactory assault or melange, if you will, of the shitty draft, moldy bar mats, the leftover green cheese smell of vagrants who populate the bar while the sun is up, an unflushed toilet and body odour. If the punk show you are watching smells, in any way, civilized, you are not in a punk bar. Unfortunately, punk bars smell like home to me, so when I hear an album that sounds like a punk bar smells, it makes me happy on a visceral level. The Faps’ latest album Grimelda manages to do that. The first thing I noticed was that the songs I was listening to were uploaded on March 25th, I knew this was not coincidental with that most famous day in the history of March 25th’s, but rather an intentional homage by The Faps to celebrate March 25th, 1939 when Billboard magazine introduced the Hillbilly chart. A historical connection like that cannot be ignored but for the sake of expediency and the truth, I will ignore it.

Grimelda is a collection of ten songs. I was torn between using the introduction I wrote or starting with a quote:  “Cook it out, Baby Daddy! I just got back from Minneapolis, where I took on Vern Gagne and Dick da Bruisah! You can bring on–Haystack Balloon! Eric Bloom! I don’t care who ya get, daddy, they’re all goin undah the Thundah–of Manitoba!!!” which kicks off The Dictators’ track Two Tub Man. The reason for that is because through the album I kept thinking of The Dictators and their lead singer Handsome Dick Manitoba. The Dictators did their own thing and fuck the consequences, The Faps take this ideal on Grimelda and run with it. The whole thing kicks off with a track I like to measure on the Marquis De Sade masochist scale. “Eternal Rift” is a twenty-five-minute instrumental that does little more than challenge the listener’s ability to endure. The only thing more difficult than making it through this track must be playing it. It’s truly an interactive experience where the performer and listener are locked in a sonic death match to see who begs God to die first. I like instrumentals but this one nearly drove me back into a life of drug-addled frenzy. I thought, Ye Gods! What have I gotten myself into?

Fortunately, the rest of the album is an absolute killer. The second track “John Denver” can best be described as Primus meets No Doubt. It is a great deal of fun and I would love to see them do it live. “Uuu Oughta Know” follows and is the track that had me think immediately of the beginnings of punk. The track reminded me of The Dictators’ and The MC5. (The original MC5 not the lame second generation) Skylar Cafferata’s vocals are much like the crazed intensity of Rob Tyner (MC5) and Handsome Dick Manitoba. The track has these fantastic tempo changes and breaks along with style changes that reminded me so much of Mike Muir and Rob Trujillo’s Infectious Grooves, I went back to listen to them before sitting down to write this. “Big Brown Town” has a feral quality that I love in punk and the track “Good Song” is self-explanatory. Although the exhortation of the line “the last goodbye” made me think of Agent Orange. Friendshi_ is the next track and I guess it’s up to the psychopathology of the listener to add a “t” or a “p” to the end of the track’s title. The track itself explores the liquor cabinet raiding aspects of friends and of youth. It is my duty to ask the tough questions so when I suspect a cowbell on a track, the question that must be asked is, was that a cowbell and if so, are you some kind commie? In “We Make Our Own Gravy” the only thing I wrote in my notes is “but would you want to try it?” The track has an awesome riff that carries it along. ‘Groomsday Part 1” is full of fantastic changes and timing signatures. There is a Circle Jerk-esque interlude on the track which I thought as totally appropriate for the Faps. The title track “Grimelda” is one of those tracks where a punk band lets you know they can play their instruments incredibly well. Rather than bashing through three chords and intentionally sloppy changes, “Grimelda” is as tight as songs get and the ability and craft of The Faps’ musicianship is showcased here and is worth the price of admission. The final track “Hash Pipe” in my note is the name of Chuck Biscuits drummer from DOA and Social Distortion and one of the best drummers I have ever heard. Blair Cowell’s groove and fills reminded me of Biscuits on this track. There is so much to like on this track. When I was listening to it, I thought “Holy shit! A cello!” It was so unexpected that I had to back and start the track over. Again, there is an exhortation “Don’t Give Up” which is right from the bottom. I loved the fade out and fade in of the track. I can’t help thinking of all the assholes who tell me Punk is dead. The Faps is proof that punk is most certainly not dead but well alive and thriving and the genre remains as one that is accessible to anyone, from any walk of life who needs no bullshit type music to get them over whatever hump they may be facing.