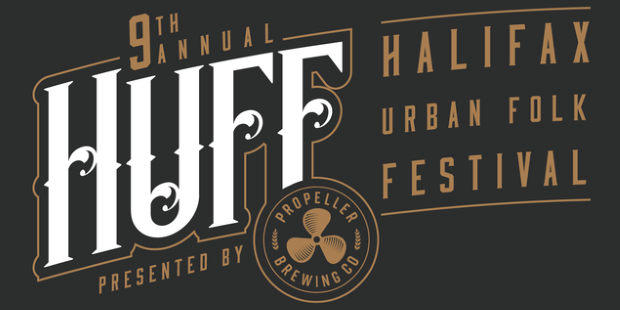 HUFF (Halifax Urban Folk Festival) has announced its full lineup—which as always includes free shows throughout the city, as well as a pair of free concerts on the Halifax waterfront thanks to a new partnership with Develop Nova Scotia.

There have been a handful of new artists announced for shows taking place at The Carleton. Kicking off HUFF on Sunday, August 26th is Paper Beat Scissors supported by a 6-piece chamber ensemble. Also performing will be Moscow Apartment and Tanya Davis. On August 27th, Tom Wilson of Blackie and The Rodeo Kings will be presenting a special reading/performance (Tom Wilson’s Beautiful Scars) centred around his book Beautiful Scars—Gabrielle Papillon will be opening for him. The talented and engaging Steve Poltz will be taking the stage on August 28th, along with Cape Breton’s Carmen Townsend. Announced for August 29th is Dennis Ellsworth, backed by Joel Plaskett sitting in as a Halifax All-Star, with Dustin Bentall and Sadie Campbell. Mick Davis and The Halifax All Starts will be performing on August 30th along with Major Love. All of these shows are taking place at The Carleton and cost $20 to $30 to attend. They join previously announced headliners Brad Roberts, Tim Baker and Lilly Hiatt performing August 31st to September 2nd for $50 at The Carleton.

Taking place at Sniggily Wiggily’s on Thursday, August 30th at 9 PM is Jarvis Church performing with The Mellotones as his All-Star backing band. At 11 PM, The Mellotones will hit the stage for a separate show of their own. August 31st is John Jacob Magistery with Natalie Lynn and Midnight Vesta. Ron Hawkings with The Halifax All-Stars will perform on September 21st at Sniggily Wiggily’s, with Fairgale and a reunion show Cool Blue Halo.

From Thursday, August 30th to Saturday, September 1st, free nightly shows will take place at The Anchor, Tempo, Propeller Tasting Room, and Loose Cannon. On Saturday, September 1st and Sunday, September 2nd, there will be a free show at Foundation Point (on the Halifax Waterfront) beginning at 2 PM and ending at around 6 PM. Mike Campbell, the Artistic Director of Huff states, “It’s very important to us to provide as much free programming highlighting a wide array of genres over the course of our festival because one of our stated goals is to expose as many people to the joys of live music as possible.”

To view the full schedule and list of performers, including free shows, click here. Tickets for all paid shows are available here.