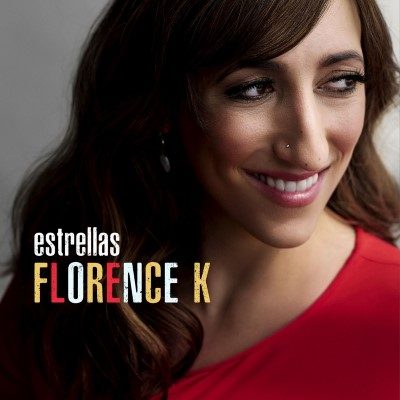 Classifications for musical genres can be a bit hard to decipher, especially in a time when most artists don’t shy away from borrowing sounds and ideas from genres outside of their own. We have country songs with rap choruses, and Latin seduction tracks featuring white Canadian pop stars. Music, if not the music industry, is globalized. So what does a genre like World mean in today’s audio-scape? Typically it is used to denote cultural music from non-North American, non-Eurocentric cultures, with a special focus on South America and Africa. And while it is not uncommon for pop artists to incorporate these sounds into their pop songs, classifying Florence K’s Estrellas as World music is especially apropos.

Of course, it helps that the Quebecois singer has had plenty of experience doing this. From her early career performing piano duets with her world-traveller mother and through the release of her six albums both alone and with various collaborators, Florence K has offered a fusion of musical traditions. While comfortable performing in Portuguese, English, French, and Spanish, Estrellas sees her focus mainly on the latter three structured around a sumptuously seductive Cuban-inspired instrumentation while maintaining a modern pop production and just a hint of Jazz (a likely influence of her 2016 duet album Quiet Nights with singer Matt Dusk).

The album opens with the title track “Estrellas,” which perfectly encapsulates everything about this musical fusion that works. The subtle electronic bassline complements the Cuban guitar surprisingly well, which accentuates the seductive longing in K’s vocals. In contrast with this, “Sin tu amor” is a playful duet with Grammy winner Alex Cuba. The song’s simple rhyme scheme makes it fun to follow along even if you don’t speak the language. Other songs like “A tu cuerpo” and “Des etoiles” steer into feelings of falling in love in the summer and passionate nights beneath the stars.

If you enjoy the trend of pop/Latin fusion that has become ubiquitous in the mainstream music scene, give Estrellas a listen.