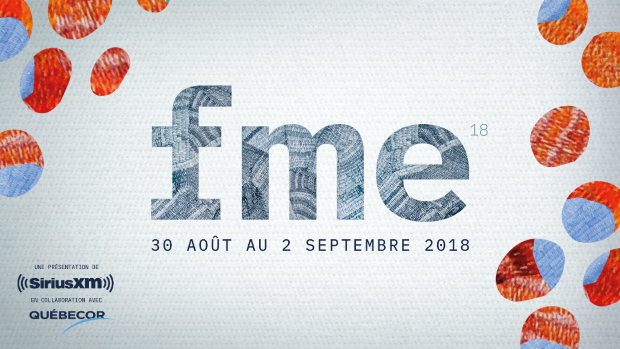 This Labour Day weekend (August 30 to September 2), Festival de musique émergente en Abitibi-Témiscamingue (FME) is the place to be. Several fan favourites are returning, including many well-known acts, and of course dozens of up-and-coming artists, as well.

On Thursday, August 30, the FME starts with a bang on 7th Street! Random Recipe and The Brooks, known for their knockout live shows, get the party started with a hot night of rap- and funk-accented grooves. Also on the programme: Nakhane, Hubert Lenoir, and Klaus (announced in May), as well as celebrated Acadian group les Hôtesses d’Hilaire.

Friday, August 31 will see Lydia Képinski, Lyse and the Hot Kitchen, Mehdi Cayenne, Penny Diving and Dave Chose perform at the “cinq-à-sept”, after which Choses Sauvages will launch their debut album at the Cabaret de la dernière chance. Rock will resound on 7th Street with Johnny Mafia and Galaxie, while Obia le Chef, Yes Mccan, and Rymz will take the Paramount Stage for the first of two hip-hop nights. Jesse Mac Cormack, Jesuslesfilles, and Kandle will also appear at various other venues. And the evening will end with a bang at the Diable Rond with Jittery Jack and Miss Amy, Dexter Romweber and guests will take the late shift on Friday, with a repeat engagement the next day.

Saturday afternoon, families are welcome to enjoy the rhythms of The Blaze Velluto Collection. From 5 pm onward, downtown Abitibi will come alive to the strains of Jérôme 50, Les Louanges, Debbie Tebbs, Soggy Beard, DONZELLE and the launch of the highly-anticipated debut album from Babylones. Meanwhile, in Old Noranda, Camaromance, Moonwalks, Les Marinellis, Yonatan Gat (with the Eastern Medicine Singers), Xarah Dion, FRIGS, TEKE::TEKE, and Yamantaka // Sonic Titan will all play, while Zach Zoya, FouKi and Loud take on hip-hop duties. Then, in the wee hours, the Petit Théâtre will throb with heavy electro beats from Ouri (live).

As the festival comes to a close on Sunday, festivalgoers have the choice of no fewer than seven “cinq-à-sept” shows:  Alexandra Stréliski, Qualité Motel, Felix Dyotte, Samuele, Simon Daniel, Jessica Moss, and LARCHE. Holy Two and Milk & Bone will perform at the Agora des arts while the triple bill of BackStabber, Depths of Hatred, and Cattle Decapitation play the always-thrilling Metal Night at the Petit Théâtre du Vieux Noranda. The Death Wheelers and Constellation Nightclub will end the evening at the Cabaret de la dernière chance and the Diable Rond.

The mad dash for both Standard and Deluxe Passports begins today, July 18, at 2 pm. Passport holders can select the shows they wish to attend until midnight on July 24, and individual tickets go on sale at noon on July 25. Go to fmeat.org to purchase passports or single tickets.

As part of FME’s La clique system, bracelets are available that allow both free access to “cinq-à-sept” events and virtual payments throughout the Festival. For the first time, these bracelets act as virtual passports. Festivalgoers can pick up their bracelets at the FME box office as of Monday, August 27. The FME blog La bouche croche offers fresh original content throughout the summer, and Festival radio station CFME goes live to air starting August 16 at 100.5 FM and at radio.fmeat.org. Get ready for an exciting new edition of this great festival!