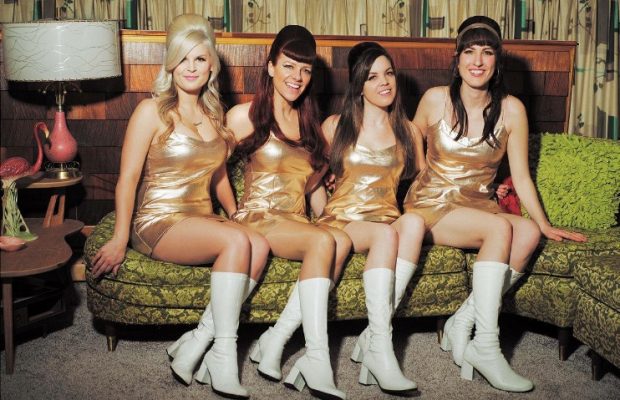 We caught up with Toronto’s own psychedelic instro surf band  The Surfrajettes in advance of their performance at Moncton’s own Mud City Meltdown which will be taking place from July 24-28, 2018. Take a few moments and find out more about the band, the upcoming festival and more! If you want to check out Mud City Meltdown later this month, grab your tickets HERE.

Yes, this is our first time playing the Mud City Meltdown and we can’t wait!

As a band, being part of a music festival is exciting because you get a chance to play to an audience who may not know who you are, and may not necessarily be into the type of music we play. It’s a chance to create new fans and connect with existing fans. And in general, festivals are exciting because it’s always great to see lots of people coming together to support live music.

Playing a festival is different from playing a solo show for the same reasons. People will get a chance to see us who wouldn’t necessarily come out to see a surf show. We love meeting new people at festivals who tell us they’d never heard of us before, but really enjoyed our set and want to hear more of us. At a festival, you also get to be part of a line up with a ton of other bands, so it’s always fun to get to meet and hang out with all of them too.

We are excited to see lots of different acts at the festival, but in particular, we’re looking forward to seeing The Sadies perform. Matt Andersen is also fantastic!

We would have loved to have seen DMAs as part of the lineup. The Mud City Meltdown seems to be a broad mix of styles of music so it would have been nice to see something different like DMAs.

All of us have been to many festivals as a fan. That’s one of our favourite things to do. A couple of us were just at the Mariposa Folk Festival in Orillia, ON, a couple weekends ago and had an amazing time.

A broad mix of music styles makes a music festival great. It’s always good to experience different kinds of music to broaden your musical tastes. We think festivals that are made up of bands that are all the same style can get boring and repetitive.

Let’s go with New Zealand! Never been there, heard it’s beautiful and the people are amazing!!

The Surfrajettes are playing the Asbury Park Surf Music Festival in New Jersey on the 19th of August and we are playing the Hot Wheels Weekend with Junior Brown August 25th in Marysville, MI.

You should expect to see four women having a great time playing for y’all, not taking themselves too seriously and shredding hard! Hahahahaha!