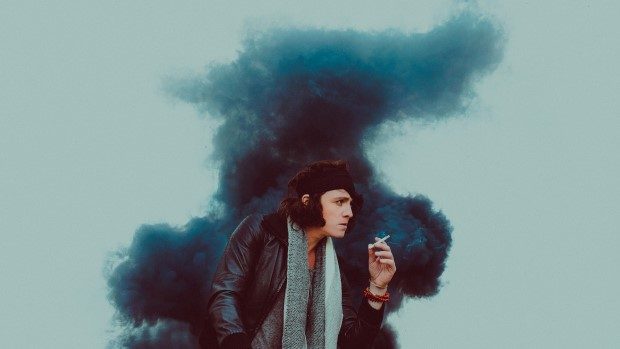 Parker Bossley is taking no prisoners with his latest music video release, “Chemicals”. Well known for his time playing in Hot Hot Heat, penning a song on Fitz and the Tantrum’s latest record, and his fantastic sense of self-expression through both music and fashion, Bossley is here today to chat song-writing, living in LA on a shoestring budget, and what the rest of 2018 holds.

First of all, thank you for taking the time to talk today. How do you feel now that “Chemicals” is out, since this is your first solo release?

More than anything a sense of relief that I’m finally starting to share what I’ve been working on.  After the relief comes excitement with a smattering of nerves.  The good kind though.  I’ve got a lot of music that needs to come out.

In a statement, you said that the song was inspired by your relationships with drugs and love and that the hook came to you on the 3rd day of a festival when the drugs weren’t cutting it anymore. Has this been a topic that has inspired your songwriting before, or is this a newly-explored theme?

I’ve definitely explored hedonism in the past, but never in such a literal way.  I think that although that moment of truth came to me at a bit of a low point as far as experiences go, the sentiment is much broader.  This kind of dark side of human nature to squeeze everything you can out of something or someone and then move on to the next thing.

Do you think that this will be a theme that you explore further in future songs, or do you have other inspiration in mind currently?

It’s always hard to tell where the next moment of inspiration will be found.  My iPhone notes are stacked with things that I’ll probably never use.  Nothing in mind currently, but once a guitar is in hand and a chord has been strummed it usually tends to come out of me.

Now, “Chemicals” is a Duran Duran-esque, vivacious joyride of a track; what part of it are you the proudest of, as an artist?

Ooh vivacious.  Thanks!  I love the way we arranged the instruments and the tones.  I recorded mostly with a Bilt S.S. Zaftig guitar and I love how chimey and almost sitar-y the lead feels in the verses.  Proud of the David Byrne rhythm guitar homages.  The percussion (cowbell!) I played in the bridge.  I like that there’s always something to surprise the ear without it ever being overwhelming.

Are you currently working on any other releases or projects?

Yes!!  I have another track coming in late summer/early fall and I’m really excited about that one.  I spent two years writing songs leading up to the release of “Chemicals” so there’s quite a bit of material to select from.  I also co-wrote and sang on the title track of Sleepy Tom’s forthcoming EP and there’s a second Fur Trade album coming down the line!

Additionally, tell us more about living in LA on a shoestring budget. You said that there were nightly gunshots and police helicopters—how did you grow accustomed to that?

Haha well, that was just at one particular place that I was staying.  The police helicopters are omnipresent at night though in certain neighbourhoods.  There’s something very beautiful and apocalyptic about Los Angeles.  Busted up freeways and palm trees.  There’s so much colour and strangeness, it can be overwhelming at times.  I love it though.  So much inspiration to be found if you’re willing to walk.

What was your favourite part about living in LA?

My favourite part about living in LA is walking through neighbourhoods and finding the hidden magic.

And lastly, as an artist, what are your aspirations for the remainder of 2018?

Stay inspired.  Release music.  Play shows.  I’d like to collab with a fashion designer (that means you!  reach out to me).