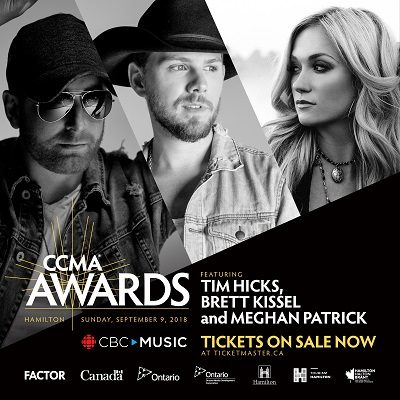 Celebrating his first Apple Music Fans’ Choice Award nomination in 2018, multi-Platinum country artist Tim Hicks is no stranger to Canadian country music fans. With two Platinum and 6 Gold selling singles, a Gold album and twelve Top 10 radio hits, the Niagara-born award-winning performer has quickly become one of Canada’s most celebrated male voices. The #1 Most Added track on Canadian radio across all formats in its first week, Hick’s newest single “Loud” off of his fourth studio album New Tattoo has become a summer anthem that fans can only hope will make its way to the CCMA Awards stage.

This fall Brett Kissel will be returning to the CCMA Awards stage for another outstanding performance. Taking home the coveted Fans’ Choice Award in 2016 and Male Artist of the Year for the last two consecutive years, Kissel has scored another six nominations this year, tied for the most of any artist. With his current single “Guitars and Gasoline” climbing the charts at stations across Canada, Kissel was awarded the CIMA Road Gold Award earlier this year and will be heading out across Canada later this fall for Part 2 of the We Were That Song Tour.

Returning to the stage after an unforgettable performance in Saskatoon with much to celebrate is reigning SiriusXM Rising Star and Female Artist of the Year, Meghan Patrick. Earning five 2018 CCMA Award nominations, Meghan recently made history by becoming the first solo female artist to take home the Fans’ Choice Award at the Country Music of Ontario Awards. With her debut album Grace and Grit generating four Top 20 singles and a Top 10 hit with “Still Loving You”, Meghan Patrick released her sophomore album, Country Music Made Me Do It, earlier this year.

Tickets to the 2018 CCMA Awards are now on-sale. Single tickets and packages are available for purchase in-person at the FirstOntario Centre Box Office and online at ticketmaster.ca with $1 of each ticket sale going directly to MusiCounts in support of their year-round music initiatives.