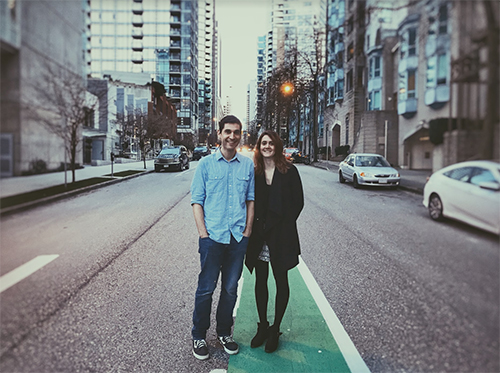 The Vancouver-based alternative pop duo, Lightning Echoes have unveiled their debut release, “In Circles”. We caught up with them for a brief chat for our newest segment of Five Questions With, so take a few moments and check out “In Circles” and find out more about Kaitlin Deavy and Alejandro Zarazúa below.

We are Kaitlin Deavy and Alejandro Zarazúa, otherwise know as Lightning Echoes! It all started while we were studying Music Production together last year in Vancouver. We enjoyed working together so much, we started a band! We are both multi-instrumentalists, songwriters and producers, and we aim to create interesting and enjoyable music to share with everyone.

Alejandro: The term ‘alternative pop’ is the best description we have for our music so far. We both like ‘pop music’, in the sense of using common chord structures, time signatures and catchy melodies, but we also want to add interesting details and sounds that could be more often associated with ‘alternative music’ (which to me is basically anything non-mainstream). We both have our personal projects with different styles, so I see this as an opportunity for us to have fun, experiment with the different things we like and can do, and try things that we wouldn’t normally do by ourselves, like trying to write a full song out of a 5-note scale that sounded interesting, or take a guitar and a toy xylophone to the park and see what we can come up with. We feel free to experiment, and that is why every song we’ve made together so far has a different sound, but hopefully, we are building a distinctive style that you can recognize in all of them.

Kaitlin: So far every song has been created in a totally different environment than the last. Sometimes we lock ourselves in the studio and don’t come out until we have a demo recording. Other times we hang out at the beach until the waves of the ocean and the heat of the sun send us some cool notes that we build into a scale, then a melody then a song. We spend a lot of time together and I think our music reflects our connection to each other and to the things we experience around us every day.

Since we finished our debut EP ‘One Tiny Bright Spot’, we have been more focused on online promotion, so we’ve only played a few live shows. You can find a couple of live videos on YouTube, where we invited other musician friends to play our songs with us and had a blast using different instruments at the studio. Lately, we have been performing only as a duo, using some electronic beats, synths and guitars (plus the occasional recorder solo!) to back us up. We also add in a couple covers of different bands we like (Of Monsters And Men, MGMT, Edward Sharpe & The Magnetic Zeros etc.), and have been trying some spoken word bits between our original songs, to tie the performance together. In general, we just try to share good vibes, connect with the audience, and hopefully make some new friends in the process.

Kaitlin: Choose your own adventure:
If you’re cruising in the car, I’d say listen to In Circles – and turn it up!
If you’re winding down from a busy day and need something to take you away from reality for a bit, check out Far is Not Far – I suggest closing your eyes and relaxing on the couch.
If you’re looking for a new personal electro-anthem, Because We Can is perfect for you!

Alejandro: We chose In Circles as the ‘official single’ because it was the first one we wrote and recorded together, and to me, it’s probably the one that better represents everything we can do as a band (in terms of writing, performing and production). But I always try to invite people to listen to all 3 songs in our EP!

Kaitlin: I have to give a shout out to Simple Plan for being my first love as a fangirl – they had great live shows and so much energy, definitely one of the reasons I love music so much! I’m inspired by Barenaked Ladies for their craziness and general good vibes, Alanis Morissette for her songwriting plus many country artists like Stompin’ Tom Connors, Shania Twain, Hank Snow and High Valley. I also love Blue Rodeo and Bryan Adams, especially since I just saw them live at RBC Bluesfest in Ottawa – great performers and songwriters!

Alejandro: I was born in Mexico, so I don’t know as many Canadian artists as I should (yet). However, I really like Walk Off The Earth, Metric, Thee Silver Mt. Zion Memorial Orchestra (and their other band, Godspeed You! Black Emperor), Feist, Lights, Purity Ring, some of the classics like Rush, Alanis Morissette and Avril Lavigne… and I’m also a big fan of some new artists that I’ve met in Vancouver recently, like Veil, Midknight, Plusol, and Mechanics of Music (which, by the way, is another one of Kaitlin’s projects!)