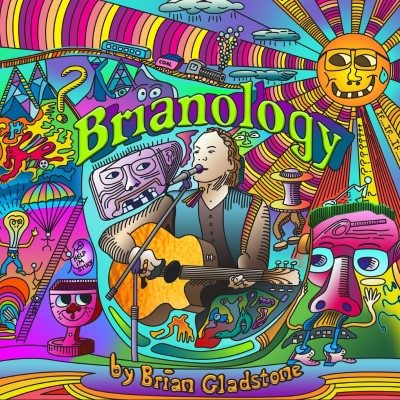 My last clear memory was sitting in a buddies apartment in Vancouver. Someone came over with a huge bag of mushrooms and after that? Not a goddamn thing. A total blank. My next clear memory after that profound silence was waking up in a shitty motel in Grant’s Pass Oregon. This was way before 9/11 so five guys in a Nissan Micra with eyes spinning counter-clockwise obviously had no difficulty with the fine men and women of the U.S. Border Patrol. It’s beyond strange to wake up in the aftermath of a hallucinogen-fueled run to what must have been L.A. The whole experience leaves you or left me anyway, feeling disconnected, off balance, slightly pissed off and bemused with the world around me. I managed to recapture that feeling while listening to Brianology the latest album from Brian Gladstone. The album left me feeling all of the things I described without having to take staggering quantities of drugs which is a win for me because I’m too old and too tired to live that life. It’s always good when you can find something that unhouses you in a healthy way and Brianology did that.

Brianology is a collection of thirteen songs and is a visitation into the past of folk music. The album has an overall feel of the roots music Alan Lomax was recording and collecting around America in the early part of the 20th century. I heard Woody Guthrie, Ramblin’ Jack Elliot and Pete Seeger through this album and it carried, at times, the weight of the sixties but is a thoroughly modern album. Brianology overall is a beautifully mastered by Peter J. Moore and produced by Brian and Tony Quarrington. The album kicks off with “I Want More Time In Your Dreams”. This song rhymes… a lot, enough so you notice but the star of the track and album is Brian Gladstone’s outstanding fingerpicking. I could listen to this guy play guitar all day. The lyrics have some great moments but none better than “Gallantry’s not dead it happens nightly in your bed” That line and others made me laugh. Following Dreams is the track “New Boy” which is a total and complete separation from the first track. I kept wondering if Brian had played punk at one time because the song reminded me of the folk that Greg Graffin of Bad Religion is doing and of Billy Bragg. “New Boy” captures a wonderful sense of innocence with lines like “He knows how to share and give his heart away,” but the song also contains a heavy environmental message in that the world we are leaving to our children is not a gift that we should be proud of. Fortunately, after the heavy “New Boy” comes “Don’t Bypass My Heart”, as the title would suggest, the song is a crack-up. The spoon player on the track is the Jerry Lee Lewis of spoon players and at the 2:26 mark there’s a little guitar fill that is mind-blowing. “Lightning Man” follows which is an ode to Nikola Tesla who invented AC power and was screwed out of every deal he ever signed his name to. The song also reminded me of a time I saw four Tesla coils at a Metallica show for Ride The Lightning it was crazy and you could feel it. Despite the subject matter and memories, I had a difficult time getting into this song because, to me, it sounded way too much like “Hotel California” and for me, that’s a deal breaker. “Joy and Delight” captured me. It has a very 60’s type of folk vibe and another quality that eluded me until I finally got it. I was thinking that this song could easily have been recorded by the late Canadian folk icon John Allen Cameron which is about as high a compliment as I can think of. The mix on this song is fantastic in headphones and the whole song carries that great storytelling tradition.

“Goin Down Home” was, for me, a miss. The song is fine and, as a rule, folk singers and truck drivers really understand the road song but just before this album I was listening to Fred Eaglesmith’s “Trucker Speed” “18 Wheels” and “Kansas” and trucker songs don’t get better than that. “Goin Down Home” has no flaws as far as music, but it just missed that lost, lonely, tired, burnt out, desolate driver that Eaglesmith has turned into a Nirvana. In “Lydney (Old Rockers Never Die)” I was glad this song is about rockers because I’ve never seen groupies hang out at a folk show except for Dylan. I kept trying to figure out if this song is a send up or a lament but there’s enough room for anyone to come to any conclusion. The song that is undoubtedly the most fun on the album is “Waiting For Summer” the line “gettin a bikini wax” cracked me up. Anyone who ever lived in anywhere in Canada in winter can relate to this song. It’s right up there with Buddy Wasisname And The Other Fellers’ “Peein In The Snow.” “Just Another Hero” brings back a heavy relevant message however as an armed forces veteran, I am not going to comment on this track as anything I say will be overly biased and angry and I don’t want to drag that into a review. “Patricia” follows and through the whole song, I kept thinking the guitar was like Django Reinhardt. Brian cracks me up with the line “The anti-gravity bra defines Newton’s law.” Stellar musicianship continues on “When I Get A Dollar” which has an Old Crow string band vibe. I loved the Doug Kershawesque fiddle which lent the song flavour. The last and most gut-wrenching song that I have reviewed so far is “Behind The Maple Leaf Slaughterhouse Doors” this is a no holds barred protest song about corporate farms and the farm industrial complex and how everything is sanitized for our conscience. The song brings to the fore important issues that are not dealt with day to day if at all. Kudos to Brian for having the conscience to be so brutally honest on this track.