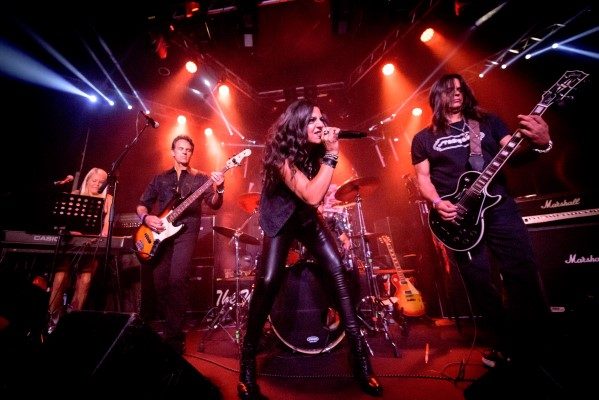 Not to give Toronto artist Suzi Kory complete credit for Guns N’ Roses getting back together, but she did meet her idol, Axl Rose, a few weeks before the reunion, so there could be a connection there! Not only did Suzi go the long haul on a trip to LA to finally meet the rock ‘n roller in person, but she’s proven her own rockstar appeal in her own original music, image and attitude.

What started as an almost life-long idolization of Guns N’ Roses frontman Axl Rose has turned into a rockstar life of you own! What was it about him and the band helped that set your own musical goals?

I grew up in a very strict Middle Eastern household where the idea of becoming a performer, something I’d dreamed about since a very young age was looked down upon. Discovering the music of Guns N Roses and their frontman’s raw and charismatic performance style ignited something in me and has continued to fuel me ever since then. For several years my dream would be put aside to raise a family, but then about 3 years ago it would all come back to me with that fateful meeting with my idol himself, Axl Rose. Although my music does not sound necessarily like Guns N Roses, I’ve always looked up to Axl with regards to performance style and giving everything to your audience on stage.

You certainly have the rock sound down to an art in your 2017 release Spellcasting including in the vocals, the shredding musicianship and original lyrics! Do you have a specific process when it comes to songwriting or do they usually come to you all of a sudden?

Most of the songs were written sitting next to the lake. I have my special songwriting spot that really allows me to clear my mind and be able to express ideas and have them flow more freely. Spellcasting was my first attempt at songwriting and with the help of my Producer at the time John Angus Macdonald (The Trews) and Engineer Nick Detoro, I was able to bring the songs to life in a way that I am very proud of.

You’ve already had the chance to open for LA Guns on a couple of tour stops including at the iconic Whisky a Go-Go in LA! What was the most important thing you took away from those performances? Who else, besides the obvious GNR, would you love to tour with?

The first opening slot I did with LA Guns was right in my hometown Toronto. It was also my first show ever performing my original songs. That was a very special night because it showed me what I was truly capable of. I had taken the gig without having an actual band and would have only a few weeks to put a band together. The second show at The Whiskey a Go Go was even more incredible as it had been a dream for me to play at this iconic venue. It was a repeat of the first show in that I didn’t have a band and had to basically put one together for the LA show. In the end, I was able to create a band comprised of musicians from LA, with the help of guitarist Frank Osgoode. I remember sitting alone at a coffee shop and trying to take it all in. I certainly got teary-eyed seeing my name on the legendary marquee!

As far as who I’d like to tour with, I would no doubt be honoured to have a slot on tour with P!nk. I’ve always admired her for her immense talent, character and level of intelligence. I’ve watched several of her interviews and I believe we are very aligned in our philosophies.

We can hear your fierce passion in the music, but what are the top 3 things you would love fans to know about you on the more personal side of things?

I absolutely love people, being outdoors and reading.

As far as people are concerned, I’ve always been a great listener and trying to be the voice of reason when someone has needed guidance or advice (although my close friends would also say I never stop talking either!). I always love meeting new people and having moved and travelled all over the world has afforded me the incredible experience of meeting people from so many different places and cultures.

Having grown up in Canada with very harsh winters, I eagerly await summer and rarely can be found indoors during the warmer seasons. This is why I even take my songwriting and reading outside. I also love physical activity but would rather go for a walk or run outside, then go to a gym.

Finally, I’ve always had a passion for reading and books. I read mainly Biographies and Motivational books. Reading has also helped me greatly with my own writing and I am now even writing my own memoir as I am building my career in the music Industry. I started writing when I noticed all these incredible things happening and I wanted to make sure I chronicled them all. I am truly a geek at heart…always have been. I’d rather curl up with a book than be out partying!

What are you most looking forward to for the rest of this summer?

I am currently writing and recording an album in LA with producer Brent Woods (Vince Neil, John Waites, Sebastian Bach). We have finished recording four songs and plan to record a couple more this summer. My first single off the album ‘The Secret Garden’ will be released late August, along with a video. Brent and I spent a lot of time working on the writing and finding my unique sound. I am really looking forward to sharing my new material with the world!