Five Questions With Son Of Dave 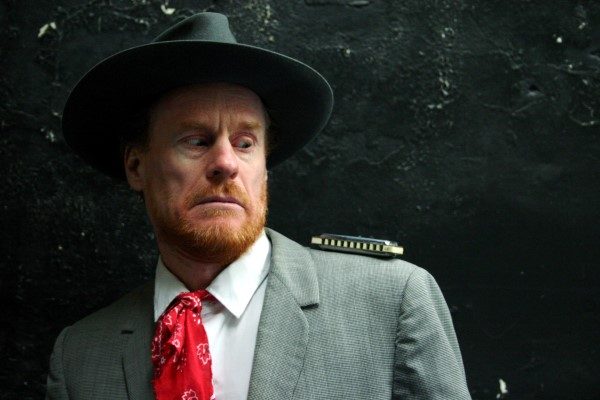 Originally from Winnipeg, but living in London, England since 1998, Son of Dave will be in Toronto on August 11 to perform at Duggan’s Brewery as part of his tour promoting his newest album, Music For Cop Shows which was released in February. It only made sense that we had a chat with him for our newest segment of Five Questions With, and what a chat it was! Check it out below.

That’s a rhetorical question, right? I mean, I’d prefer you introduce me as I’m a bit shy. Say something like, “Hey everybody, this is Son of Dave, he’s new to Canadian Beats but already has millions of fans spread over Europe, North America and beyond. He’s a bit shy, and obviously has a massive chip on his shoulder…He comes from Winnipeg but has lived in London UK for 23 years and has a resumé as long as Confucius’ beard….”

I’d love to do that. Nothing I like more than telling people all about what I do for a living. It never gets boring, even after 21 years of being a one-man harmonica beatbox blues and funk party eruption, I still love to describe it to people who ask, or rather tell me to “tell us a bit about your music and writing style”. I mean, Mick Jagger might get a bit tired of that question, or rather command, but that’s because he’s older. I’m just a spring chicken at 51 years of age. Couple more decades and I might get tired of being told to describe my music and writing style. But not yet, no sir. I play the harmonica, make beats with my mouth, shake dem rattles and stomp my foot. My tunes have made it onto Breaking Bad soundtrack, Preacher, Bloodline, I’ve been on telly, I’ve played shows in Africa, the Middle East, and I write tunes in a style which is pretty much my own. Nobody sounds like Son of Dave and I don’t sound like anyone else. It just happened that way. Comes from being desperate to do something especially good, which is what people deserve to hear.

I have a suspicion that YOU haven’t been to see Son of Dave live. I’ve done around 1400 concerts, but maybe none where you live. If you’d like to come, you can expect to see a grown man work very hard for your entertainment. You’ll be inspired to work harder yourself I bet! It gets quite sweaty. There is a lot of racket for just one bloke on harmonica. I cheat a bit with a looper, but I don’t stop working hard up top. The dance floor will be packed. It’d be more fun if you come, really.

I would usually take into account the temperament of the individual, but as it could be anybody, I’d suggest starting with “Daddy Was A Wolfman”, and watch the video. There are eight albums of good tunes (many funny videos) after that, and it’s not my best song, but it’s good fun and relatively new. Enjoy.

Ben Sures, Mohair Sweets, Johnny Sizzle, Forgotten Rebels, Big Dave McLean, Neil Young (he mentioned me in his book, so I should mention him here), Paul Reddick, Tanya Tagaq, Rusty, Al Simmons, and all the old school musicians I grew up with in Winnipeg, some of whom I’ve named here. I’m not much in the scene, however, kinda working all over the place, so I don’t know the lovely new artists. My faves are a bit dated.