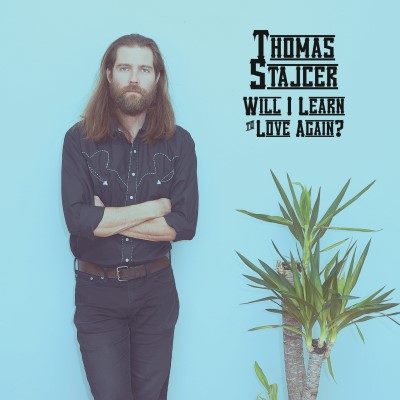 Halifax-based sound engineer Thomas Stajcer is stepping into the spotlight with his debut album Will I Learn to Love Again. The east coast rocker has written with some of the most notable songwriters on that side of Canada including Dylan Guthro, Campbell Woods, and Joel Plaskett – who also co-wrote two songs on the LP. Stajcer also has a 2017 Country Artist of the Year nomination from The Coast’s Best of 2017 Music Reader’s Poll, and landed himself a spot as a finalist for the CCMA’s Spotlight Performance Contest – the winner receives a coveted slot during Canadian Music Week.

Stajcer’s classic country aura is all over this album. Overflowing with a mix of slow-burning ballads and knee-tapping violin and banjo bangers that would make the greats proud.

You couldn’t open with a sweeter melody than “Love Me Now (Or Never Again)”, or he’ll dial up the honky tonk with the racing energy in “In The Long Run”. A beautiful moment in songwriting comes from the Plaskett co-written “Wildfires” and boasting heartbreaking lyrics like “I was never easy on your heart…close my eyes to the smoke, our love had caught fire. And I let it burn higher.”

The album’s first single “Any Old Road” is a bustling western ditty with a hint of rock n’ roll; a great choice to introduce new listeners to the energy they can expect to hear when Stajcer records his classic country-inspired set. The album’s title track “Will I Learn to Love Again” is is another lesson in heartbreak from the songwriter- accompanied with melancholic violin inflections. But it’s not all heartbreak and heartache. The last track is “How Long Could I Wait” – a fast-paced blues-inflected jam with a killer harmonica and piano accessory.

Modern country gets a much-needed throwback with Thomas Stajcer’s debut- chalk full of rowdy choruses and old-school heartbreak ballads. Combined with his deep, slightly raspy vocals the Maritimes country-rocker delivers a debut with the same energy and level of production you would expect from a seasoned professional. If this album is only the start, I’m predicting a great career ahead for this up-and-comer.