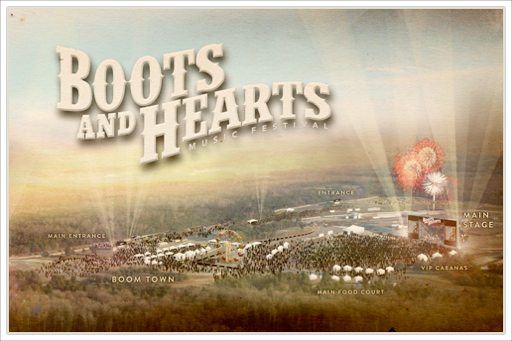 Boots and Hearts is one of the biggest Country festivals out there and showcases some of the greatest talent today. Each year they bring new and bigger talent and 2018 is no different. But because we’re located in this beautiful country of Canada, I’ve brought together ten of Canada’s best acts to catch at this year’s festival. I know there are many talented acts performing on the BH stage this year, but I’ve tried (almost unsuccessfully) to narrow it down to just ten.

So follow along, learn the lyrics and get ready to sing along to these top ten Canadian acts.

10. Jade Eagleson – Last Year’s Chevrolet Emerging Artist winner will hit the stage as part of the lineup in 2018. Jade Eagleson won over the masses with his deep twang. Born and raised on a farm, this country boy rocked the stage last year. It’ll definitely be a treat to see what he’s been up to since last summer!

9. Redhill Valleys – This Hamilton Ontario band were the runner-up to last year’s Emerging Artists showcase. They were just as incredible so it’s nice to see them on the lineup for 2018.

8. Petric – These guys have been heard all over the radio lately and their music is super catchy and addictive. Their most recent album just came out a few months ago and it’s definitely one to listen to!

7. Chris Buck Band – These West coasters have a fun and energetic feel. Their song “Giddy Up” is definitely a party song and I can see them play the smaller stage rocking the late-nighters into the morning hours.

6. Kira Isabella – This girl always puts on such a great show. She has so many great songs to sing along to and her stage presence is awesome. She never disappoints me every time I see her perform and this show will be no different! Her newest song “Little Girl” is such a powerful girl anthem and I’m excited to hear it in person!

5. Madeline Merlo – Madeline has come out with some very catchy tunes that go great with the summertime vibes. She is another act that never disappoints when she hits the stage and I can’t wait to see her perform Motel Flamingo live on stage!

4. Meghan Patrick – Meghan has been another artist I’ve seen move up the charts for quite some time now. I remember seeing her at a new artists showcase a few years back and now she’s become a powerful female force on the radio. She’s produced hit after hit and fans of all ages enjoy listening to her music.

3. Lindsay Ell – This girl has a duet on Keith Urban’s new album that includes a pretty wicked guitar solo. She’s rocking the radio waves and Keith mentioned on stage while at the Budweiser Stage in Toronto last weekend that she’ll be heading out on the Canadian leg of his tour! It’s always exciting to see Canadian artists getting recognition from the international artists out there!

2. James Barker Band – These guys started out as an Emerging artists contender, who went on to win a few years ago. Since then they have been continuously gaining momentum, and it’s easy to understand seeing as they keep producing hit after hit. They’ve been spending quite a bit of time in the States and making a name for themselves all over Canada. They have easily become my favourite Canadian country band and I cannot wait to see them live again!

1. Dallas Smith – Dallas continues to show us the amazing things he’s able to achieve. He’s a genuine person who works hard for everything he has and sticks up for what he believes in. I’ve gotten to see him grow as a country artist over the years and it’s always amazing to see the fans multiply tenfold each time I see him. He always puts on a great show and I’m excited to see him back on the Boots and Hearts stage once again!