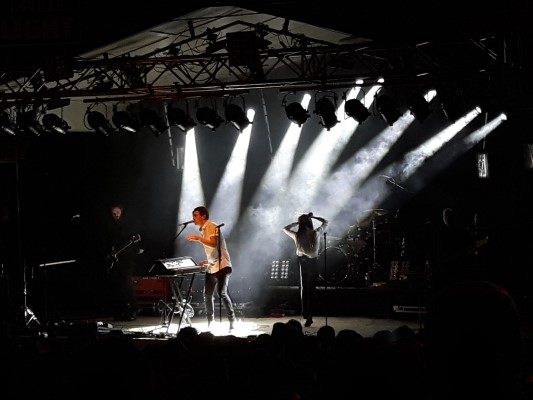 Sunday, July 1st was a cold one in Newfoundland but that did not stop the masses from flocking to George Street to celebrate Canada’s 151st birthday. Anyone remotely familiar with Newfoundland and Labrador will have heard of George Street, with its claim to fame being that it has the most bars and pubs per area in all of North America.

The night began with local acts Property and Soap Opera. Both bands seem to have a solid fan base, as many patrons sang along to their songs. Their solid playing, interesting lyrics and the excitement they had on stage is sure to keep them sharing their music for years to come.

The headliners for the night were no other than July Talk. For those of you who do not know this band, well you better stop reading this and go listen to their music. July Talk is comprised of singers Peter Dreimanis and Leah Fay, guitarist Ian Docherty, bassist Josh Warburton and drummer Danny Miles. The stage presences and chemistry between Peter and Leah is like no other. Their banter and the theatrics used to suit the music will quickly lure in the audience. Their interaction with their fans is always a memorable one. Fans noticed Dreimanis checking out local band Property and tried to get his attention. With a smile on his face and patience as the line to take that million dollar selfie with him increased, he made sure each person got to say hello. Leah spends a part of their shows in the audience. From giving us a double feature with walks across the barrier in front of the stage holding hands with those in the front row (with security quick to follow) to finding her way to the middle of Prince Edward Plaza, she never lets the audience down.

Their setlist was a mixture of tracks from their self-titled album July Talk and their latest album Touch. With hits such as “The Garden” and “Push and Pull”, they had the audience singing along and dancing. The street was packed and getting that golden spot to see everything was next to impossible. Yet no matter where you stood Dreimanis’ raspy voice and Fry’s clear, crisp responses definitely had those watching singing along. It is refreshing to watch a band who truly loves what they do

With that, I am going to leave you some advice. If you are ever given the opportunity to see July Talk perform live – DO IT!!!!! Nothing beats their live shows!