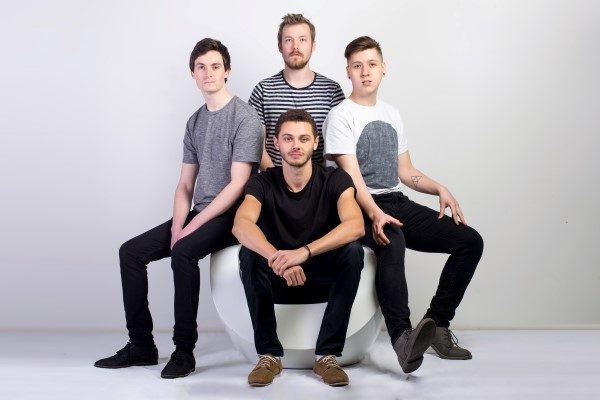 We caught up with lead vocalist, Austin Ledyard of Vancouver’s indie-pop band, Royal Oak to chat in our newest segment of Five Questions With. The band has recently released the first single, “Tell Me” from their new EP, Pretend which will be released on July 20, 2018. In support of the release, the band will take off on tour, you can check out the dates below, as well as listen to “Tell Me” and find out more about the band.

Hey! My name’s Austin from the Vancouver,  BC indie-pop band Royal Oak. We’re a group of four childhood best friends making music together. We have a new EP called “Pretend” coming out July 20th that we’re very excited about, and hope you will be too!

As a band, we’ve never been ones to flesh out full songs as a single person. It mostly starts with an idea someone brings to the table – whether it be a chord progression or a chorus – and we work on it together all as a group. Each member brings their own unique perspective to the songs which helps to keep things interesting.

We have our Vancouver album release show at The Biltmore Cabaret July 27th, with a full Canadian Tour following closely on its heels!

Our live show is something we really pride ourselves in. We believe that live music should be an experience, not just a chance to hear a collection of songs by a band. So we try and take some of our songs in a bit of a different direction to make something fresh out of it, to make sure it’s different from just playing the song as you normally would.

Our new single “Tell Me” from our upcoming EP came out last month, and it’s truly our band at it’s best. Go give that a listen, you won’t be disappointed.

There are so many great Canadian bands and artists, but recently for me, it’s been: Scott Helman, In Search Of Sasquatch, Said The Whale & Alessia Cara. This will change every couple of weeks – there’s always so much to choose from and listen to!