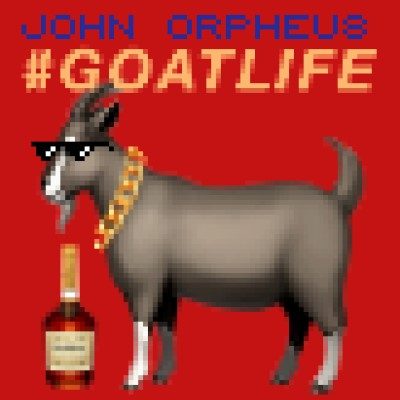 Goatlife is the fourth mixtape released by Trinidadian-born, Toronto-raised artist and collective John Orpheus. The project was two-years in the making, produced by Mike Schlosser at Little Noise Records, coming together with the help of Orpheus’s longtime collaborator and percussionist/DJ, Sarah Jane Riegler, along with vocalist Chaenel Mattis.

John Orpheus (aka “J.O”)  came to Canada from Trinidad as a 13-year-old with a passion for making music. Throughout his mixtapes, he and his crew have created a medley of sounds combining Caribbean and African rhythms with modern hip-hop tones.  In 2017 they dropped three mixtapes in seven months, each built on multiple themes including pan-Africanism and intersectional feminism.

He has travelled around the world with his music; his travelling event series “Haus Orpheus” brings together live music, spoken word, local vendors, and a variety of other community-engaging outlets. Goatlife combines booming drums, effortless swagger, and catchy choruses. The title track kicks off the album with infectious energy that carries through the seven-track mixtape. Standouts include “Parachute” which has ‘summer jam’ written all over its soca rhythms. “Lady Boss” reads as a love letter to powerful women backed with punchy dancehall melodies.

Goatlife is funky, swanky and infused with these themes of freedom, positivity, and cultural celebration. John Orpheus and his crew will guide listeners to a musical hybrid where modern hip-hop and traditional Trinidadian sounds blend to create something fresh and captivating.