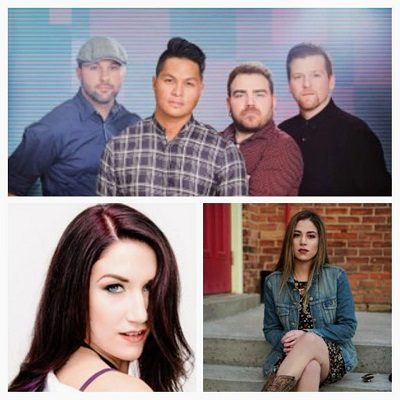 The Mississauga Waterfront Festival celebrated their 22nd year, June 15-17, in the picturesque Port Credit Memorial Park. Saturday and Sunday’s line-up was billed as Credit Goes Country with many local and provincial acts gracing the Tim Hortons Stage and was presented by KX Country 94.7 and 95.9.

Sunday also had Double Trouble – Line Dancing Lessons twice during the afternoon, where many of the patrons participated.

Three of the acts that performed – Big City Lights, Mackenzie Leigh Meyer and Nicole Rayy – were winners of the Emerging Country Music Artist Showcase. This was a special contest presented by New Country Spirit and CMAOntario that ran earlier this year. The initiative gave artists not only the chance to perform, other perks included $300 in New Country Spirit merchandise, a $200 honorarium donated by CMAOntario, a professional photo shoot with Brandon Ferguson Photography valued at $500, a $100 Gift Card donated by Rock N Horse Saloon in Toronto and complimentary CMAOntario Conference & Awards show package for 2019.

Over the course of the two days, we were able to meet up with many of the artists and talk to them about this event and what they have been up to. Here are the three contest winners:

1st Place: Big City lights are a 4-piece harmony driven New Country band from the Greater Toronto Area, comprised of Michael Villamor (Lead Vocals), Keith Dean (Lead Guitar, Harmonies), Johnny Gregson (Bass & Harmonies) and Kevin Ferguson (Drums). Managed by none other than Cold Creek County’s Doug Oliver and Trevor MacLeod under Fairhurst Music Management, you know this band has to be something special! Their stage show is an eclectic mix of genres and influences spanning from Marvin Gaye to Chris Stapleton. Be sure to check them out at a show near you!

2nd Place: Mackenzie Leigh Meyer hails from Hamilton and, in 2017, graduated with honours in the renowned Music Degree Program at Humber College where she studied voice and performance. One of her professors happened to be the incomparable Rik Emmett of Triumph, who commended Meyer on her “mature and disciplined” approach to songwriting. She began her music career in 2013 after winning the Hamilton Music Awards Rise to Fame Competition. There has been no slowing her down since. Meyer has performed all over Ontario at some of the major festivals and establishments and opened for many of today’s hottest Country Music acts.

3rd Place: Nicole Rayy is no stranger to several of us at Canadian Beats. We have seen her and interviewed her many times over the past several years. She is one of the hardest working up-and-coming artists we know and with a number of singles under her belt like “Don’t”, “Bow & Arrow” and “Fireproof” it is no wonder she earned herself a 2018 CMAOntario Rising Star nomination this year. Whether it is in the songs she writes, the music she records or the stages she performs on, her goal is always to remain true to herself. With her current single to radio, “Bad Habit”, Rayy’s star is continuing to rise.