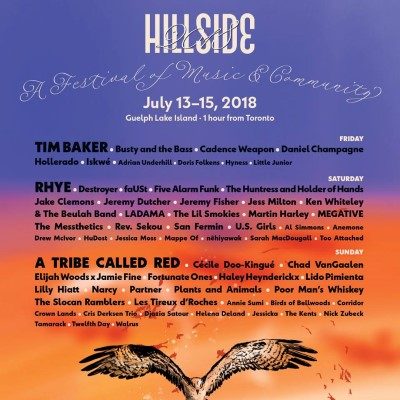 Hillside Festival (July 13-15 2018) is found at Guelph Lake Conservation area. Just minis from downtown Guelph, this festival is 34 years young and has maintained its uniqueness, with local and international music, drumming harmonies, and environmental initiatives, suited for your whole family. With three stages, a children’s area, Artisans, Food Bazaar, and workshops for all your creative inspirations, Hillside provides a well-rounded festival experience. There is always something to watch or do on the Island, and the Festival maintains a fun, safe, and environmentally conscience domain, to enjoy the three-day weekend.

A Tribe Called Red is an indigenous Band stemming from the Ottawa, Ontario region. Combining, traditional pow wow drums and vocals, modern hip-hop blended with edgy electronic styles. Looking forward to them closing out our weekend at the main stage on Sunday Night.

Busty and the Bass is a Montreal based group turning Hip-hop and rap on its side, which incorporates two vocalists, a horn section, and a diverse range of musical genres. Meeting at McGill University they developed their live performance, and all nine of the members are still playing together today. Catch them playing at the Main Stage on Friday night.

Daniel Champagne is a Finger Style Percussive Acoustic guitar player, from Brogo NSW, Australia. This is his second time paying Hillside Festival, and you may remember him as someone who bends the traditional acoustic guitar playing rules, and someone who thinks outside the box when it comes to melody. Once said to show ‘Guitar Gymnastics’ while on stage, tapping, knocking, strumming, and adding harmonics, all while singing beautifully crafted lyrics. Daniel calls Canada his home away from home, and is welcomed as an honorary Canadian all across our native land.

Elijah-Woods & Jamie-Fine are an electronic- pop pairing from Ontario. They met while he was studying engineering and production at Ottawa’s Algonquin College, and she was working on campus after graduating from culinary school. They soon started writing and recording in Wood’s basement. Woods and Fine Made their T.V. debut on the new music show ‘The Launch’, and they have broken all expectations with their musical energy. See them at the Main stage Sunday night.

Hollerado, another Ottawa native group, played my First Hillside Festival, along with Daniel Champagne in 2014. Since forming in 2007, growing up on the same street in the nearby suburb of Manotick, these gents have since been nominated for a Juno, and have had radio play all around Canada. Touring as far as China and continuing to produce catchy Alternative tunes. Don’t miss them at the Main Stage on Friday night.

Jeremy Fisher who’s known for touring by bike, since 1998, and has completed the journey across North America an astonishing three times. Yet another Ottawa resident, beginning in 2001 bike touring to raise funds for his own independent album, and worked with the Institute for Transportation and Development Policy to raise funds for the “Tour des”, promoting access to bicycle transport and to education for girls in Africa. I fist saw Him at a neighbouring Festival, Riverfest Elora in 2016, and would describe him as Alternative Folk, with a slice of comedy. Defiantly check him out at the Lake Stage Saturday night.

Tim Baker is the front man and writer for the band Hey Rosetta !. Baker is familiar with playing major festivals, stadiums, theatres and clubs, with his heavily awarded band. Tim is now creating a new solo sound since the summer of 2017, and hopes to release the album he’s working on in 2018. See him at the Main Stage on Friday night.

Hillside Festival has a no-trace policy for the weekend. Hillside is reaching and exceeding environmental practises, keeping the Festival neat and tidy. Reusing dishes with the dishwashing program, no plastic water bottles, and fashioning the Main Stage with a living roof to minimize our carbon footprint.

This year Hillside’s theme is ‘Counter Hate with Beauty’, and what better voice do we have then music, to speak to and reach out to us all, because music is universal…