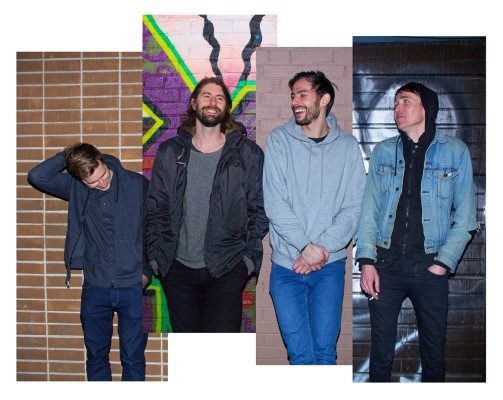 We had a chat with Toronto based band, Jiants which is led by former pro skateboarder, Jesse Landen. The band released their album Odd Trouble in June. Now, they have unveiled a video for their newest single, “Plan”, which you can check out below.

If you want to check them out live and you’re in the Toronto area, you’re in luck! Their album release show takes place on Thursday, July 5 at The Baby G, so stop by and check that out, if you like what you hear. Find out more about Jiants in our newest segment of Five Questions With below.

Sure, my name is Jesse Landen. I sing and play guitar in a band called Jiants, which consists of Adam Kesk on bass, Jon Sirdevan on drums, and Joe Delfin on lead guitar.

We are an indie/alt/jangle/pop band with a bit of a ’90s vibe. Our genre description words have turned into kind of a running joke in the band. I think that this is the best I can do at this moment, haha. Most of the songs are usually started on guitar along with a little demo, then they get worked out by the band through rehearsals and a few home studio sessions.

We do! We are playing our vinyl release show at the Baby G on July 5th. We recorded our recent record as more of a three-piece but we now perform as four. So I think our live show is basically a bigger, badder version of all the songs.