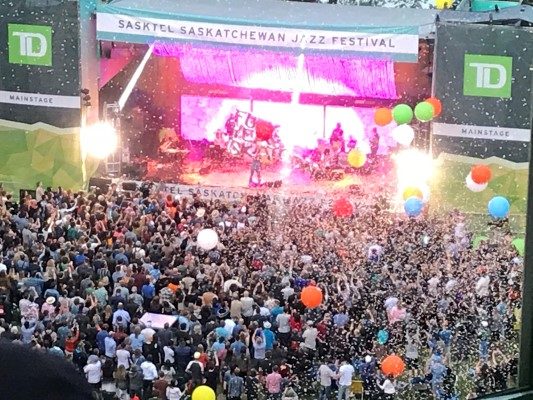 After much anticipation, dedication, and planning, the SaskTel Saskatchewan Jazz Festival has officially started!  A week worth of the finest offerings in live music is ready for eager listening ears.

The night kicked off in grand art rock style with opening band Wand from Los Angeles. Overall, imagine if the Talking Heads and Sonic Youth collaborated after school in their parents’ basements after spending many years together in a Finishing (etiquette) School. One part danger, one part safety,  Wand is reminiscent of 90’s alt. meets 60’s psychic, peace and love hippies with a cutting 90’s grandiose bright guitar sound sensibility. Wand’s singer Cory Hanson is playing a Fender Jaguar Thurston Moore guitar wearing a long Kurt Cobain inspired jacket that looks like a his iconic bathrobe that used to be worn over a “Hi, How Are You Today?” Daniel Johnston t-shirt.

Is that Stone Roses UK alt. in there as well?   A mix of Soup Dragons meets Oasis and every other band to copy the Beatles using keyboards and drum loops in a pleasant, grass swaying dance rhythmic way. For a Los Angeles band, the English sound is simultaneously endearing and honouring, blurring the lines between inspiration and originality.  Swirly jams with driving snare and high end walking bass, this is new wave art jam melodic noise, high energy stature with shoegazing sensibilities.

Lead singer and guitar player from Saskatoon art rock sensation Autopilot commented, “I am impressed with the stage show.  Their style and look really compliment their sound.”  High praise indeed from a local master of new wave art rock!

Watching the Flaming Lips live is trying to describe seeing the Mona Lisa for the first time.

Everyone knows it is amazing and beautiful and wonderful. So how do you describe it? The best you can.

From the first song with glitter fireworks cannons, strobe lights, and an inflatable “F*** Yeah Saskatoon” sign, the SaskTel Jazz Fest was instantly joyous and artsy and pretentious and beautiful. By the second song, from arguably their most commercially successful and musically popular album Yoshimi Battles the Pink Robots, the crowd full heartily sings along with energy and all the enjoyment of every fan ever. The Flaming Lips are the goodwill ambassadors of artsy alt. rock music worldwide and beyond.

If you hate the Flaming Lips you hate life itself. So happy, so glorious, so joyous, so infectious; this is the perfect show to open the SaskTel Saskatchewan Jazz Festival the night before the Saskatoon Pride parade with a band who is unabashedly proud; when other bands are seemingly discovering their sound, the Flaming Lips are confident, self-aware, confident and brave.

The set was the perfect combination of fast and slow, sweet and salty.

Before other bands have finished their sound check, the Flaming Lips have programmed their live show, got their inflatable unicorns ready, and created an experience catered for themselves and shared to anyone who attends. This is sonic happiness and joyful riffs. The stage lights and graphics add to the experience, like extra full body planks to sit-ups.    Every band everywhere should take notes and learn how to create a live show based on their experience and their sound and their loves.

As the sun descended, the Flaming Lips ascend into glorious musicianship and amazing performance.  Best coma near-death experience ever, the brain producing life altering dopamine to let the body die peacefully with the best soundtrack ever.

As a reviewer, I try not to fanboy out. I attempt to be objective without extra personal bias. That being said, when the Flaming Lips played David Bowie’s “Space Oddity” sincerely without irony while the lead singer was in a plastic bubble crowding surfing with dire and ferocity and intensity…that was it. Nothing else needs to happen the rest of the weekend. What more could happen to propel this festival any further? But the show wasn’t done and there was more to play.

I pushed myself forward towards the vast outdoor stage, the old school punk alternative fan wanting stage front and centre to see every twinge of every knuckle muscle on every guitar string. What I discovered stepping back to my favourite far off corner of my nonviolent grassy knoll is that I can see the giant dancing eyeballs, I can hear the cutting guitar riff, the samples hand claps hit my between the eyes.  Stepping back I see the Monet for the work not the individual dots.

Speaking on behalf of the band, the audience and the general mood of the night, Wayne Coyne, lead singer of the Flaming Lips comments “This [experience] will be very hard to top.”

And he is right. Tonight Saskatoon is the most peaceful place on earth and we need to keep it that way.

Closing the show singing under an inflatable rainbow is perfect as Coyne reminds us all, “Never doubt the rainbow!”

The Flaming Lips are an amazing live band you must see before “instead of saying all of your goodbyes, let them know you realize….”