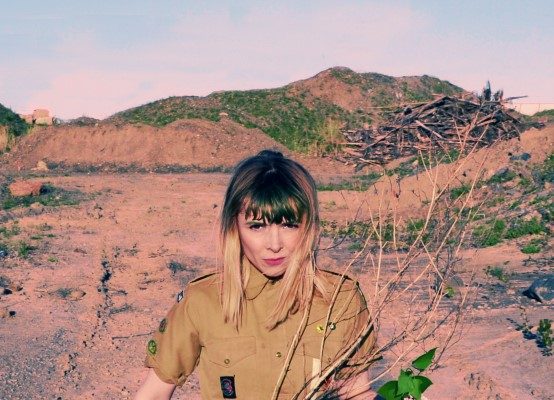 Montreal’s Petra Glynt aka Alexandra Mackenzie is about to release her brand new album, My Flag Is A Burning Rag Of Love via Pleasence Records on September 7. You can pre-order the album HERE. We are glad to have the chance to share the first single entitled “New Growth” with you. Check it out below, and find out more about Petra Glynt in our Five Questions With segment.

Hi, I’m Petra Glynt, a.k.a. Alexandra Mackenzie! I’m based out of Montreal but lived in Toronto for 10 years. I make an array of art including eclectic pop music.

I’m a producer, percussionist/drummer, and singer, all of which aren’t necessarily prioritized in that order. They all play a big role so sometimes writing songs can start with either focus… but more often than not it starts with a beat and I throw some texture into it to give it more of a personality. The songs themselves generally arise in reaction to things that are going on in the world around me, which give them their political nature. There are too many urgent things going on in the world to talk about them rather than romantic relationships, you know?

At the moment, my next show isn’t until August 2nd in Montreal at the Canadian Centre for Architecture, then it’s off to the Electric Eclectics Festival in Meaford, Ontario, then the RainbowTrout Festival just outside of Winnipeg. When I play live, I play solo with a sampler, floor tom, and rototoms, and of course, I sing. It’s loud and athletic with a dripping heart.

Mmmmaybe “This Trip” and “New Growth” of the ones that are released …. lol that’s two. Tough question!