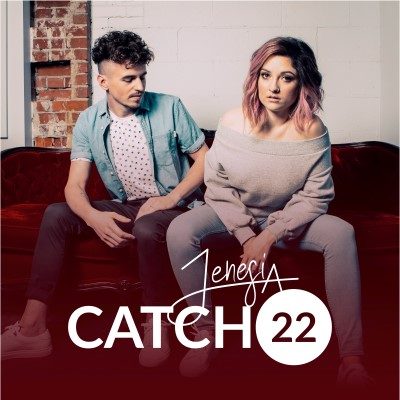 Pop duo Jenesia’s debut EP Catch 22 is here and it’s a delightfully soulful collection of new pop songs. Husband and wife Alexander & Jenesa MacMullin (formally known as Soap Box Duo) have been busy since they started making music together in 2016. A few of their career highlights include finalists for the John Lennon Songwriting Contest for their track “Kiss The Girls”, a growing Youtube view-count currently sitting at over 160,000 views, and travelling to Haiti to film “Soap Box For Haiti” – a documentary highlighting the country’s beauty while also bringing attention to philanthropic efforts of multiple organizations; the film won international recognition.

Their debut EP consists of six creatively crafted stories set to sultry, slick pop melodies. Each song has a specific story to tell; from the passions of a married couple escaping to the ocean in “Mexico” to themes of addiction in “Catch-22”. “Water to Wine” may be about financial instability but it’s set to such a lively jazz background it’s wistful lyrics don’t seem so hopeless.

Channelling the slow and steady vocals of the duo’s influences like Aretha Franklin and Amy Winehouse comes through in “Easy” – a beautiful, simple ballad about being in love. “Walls” on the other hand is an emotion-driven story of physical and emotional abuse and the fight towards freedom. We end things with “Anthem” and like “Walls”, it has a strong message behind it – this time it falls around social justice and ripples with power.

“Catch-22” was a pleasant surprise considering this was the first real taste of the Alberta-based duo’s music; Alexander and Jenesa have crafted a smart, emotionally-driven debut album that touches on both the romance and the reality of life. Their ‘music with a message’ attitude is refreshing in the modern pop landscape and will hopefully continue to grow as they develop their sound and their fanbase.