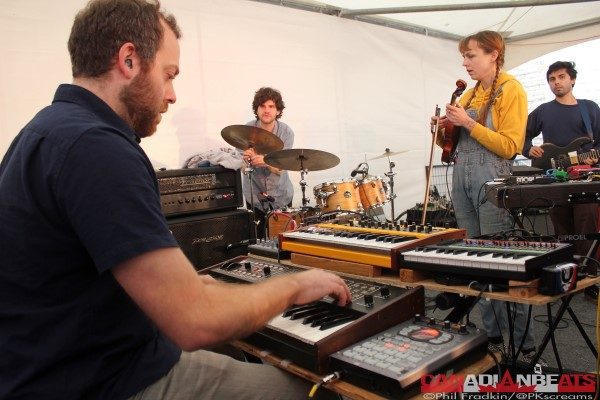 I had caught myself today at one specific venue for almost the entire evening. With such a wide range of acts from all over Canada. There were another two acts that had come in from Philadelphia and New York.

Empath had kicked off the afternoon with what could only be described as what Sled Island is all about. Though Sled Island is home to a ton of amazing Canadian acts, it never shies away from an international act. Empath hails from Philadelphia and is consisted of a Taurus, Virgo and Sagittarius and just like the personalities of horoscopes can clash so does the band, but for good reasons. Finding harmony in a highly distorted noise rock mixing in contrasting angelic vocals. Though the lyrics at times are hard to understand the instruments were just as flawless as recordings. 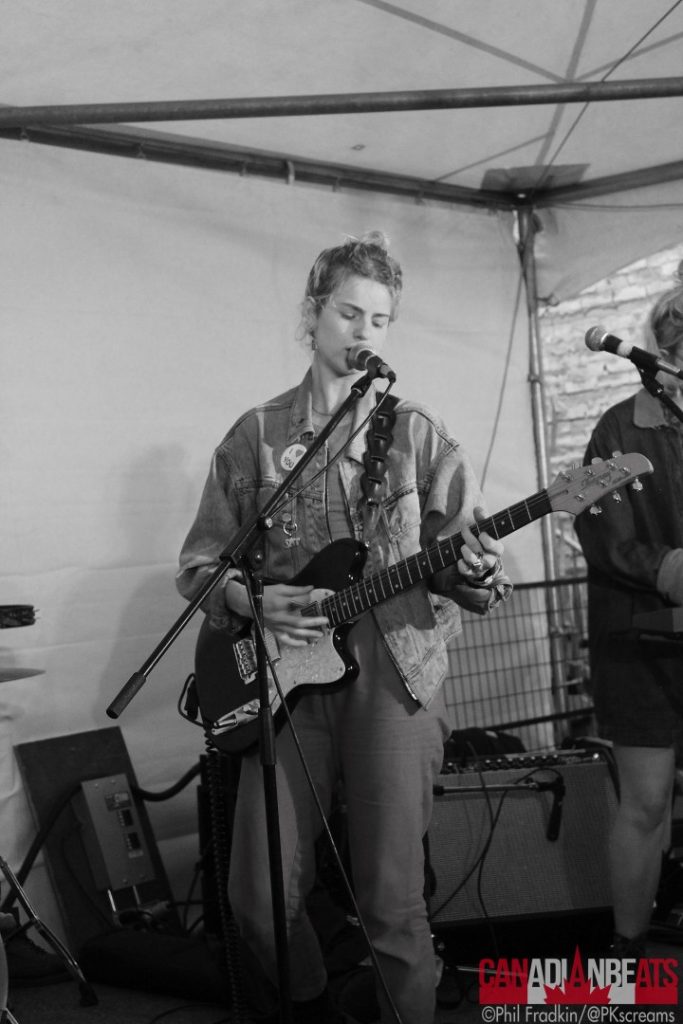 Just around the corner from the show. Swim was hitting the stage with their set. This post-punk meets psychedelic twist sound was bringing energy to the bar which was slowly starting to fill up for the weekend of Sled Island. Just like peoples daily life, and the positive chaos of the festival. Swim was frenetic yet inviting with their creative guitar riffs blended with vocals was something that defiantly brought energy to the rest of the evening. 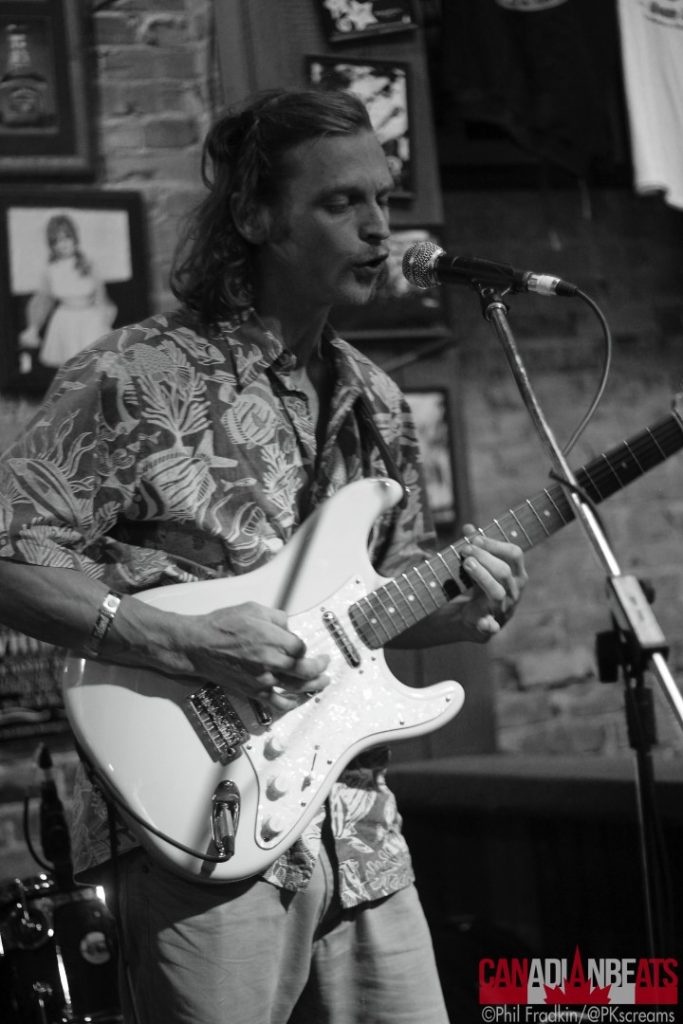 Crom/Dam is just as the name entitles. A Crom on guitar and a Dam on bass, or is it the other way around? This duo consisting of a guitarist and bassist had slowly started filling up the parking lot for the headliner Guerrilla Toss. Though having strong and obvious elements of trash punk. The duo also brings in a sinister twist of lo-fi synths attracting even more of a wider range of audience. 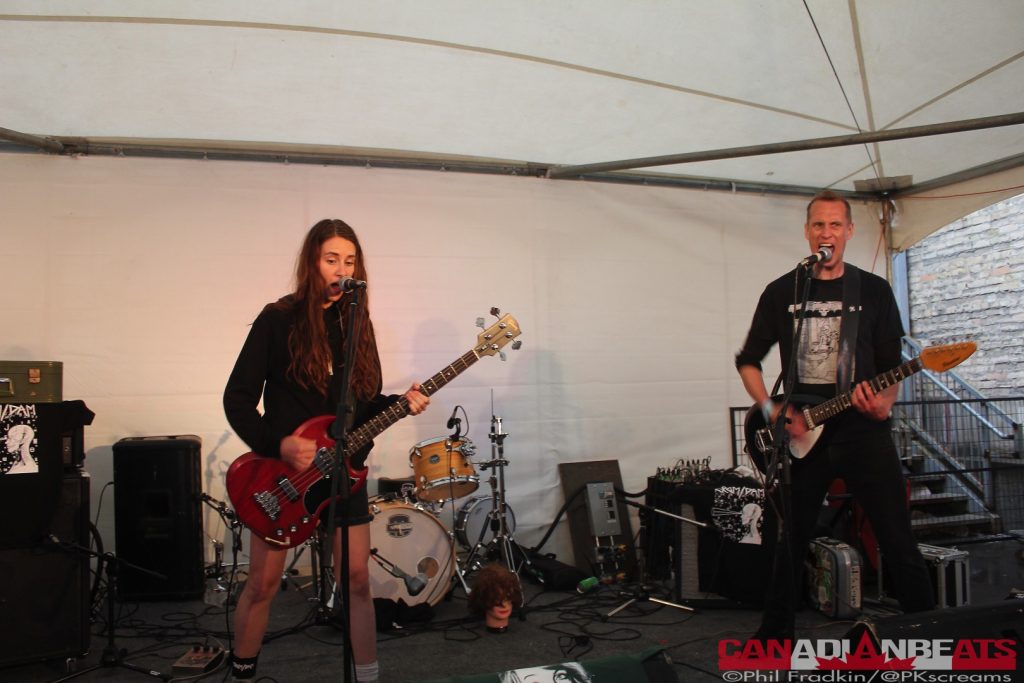 Calisthenics was a name I was bound to see on the schedule eventually. One of the hardest working all-ages bands in Calgary, as I’ve seen the name pop up on my news-feed numerous times, so I took a shot and finally checked them out. When I saw the promo photo on the Sled Island website I was initially getting an Enter Shikari vibe from them. Which wasn’t too far gone from their set. With a lo-fi sound twisted into punk roots brought the entire crowd up front. 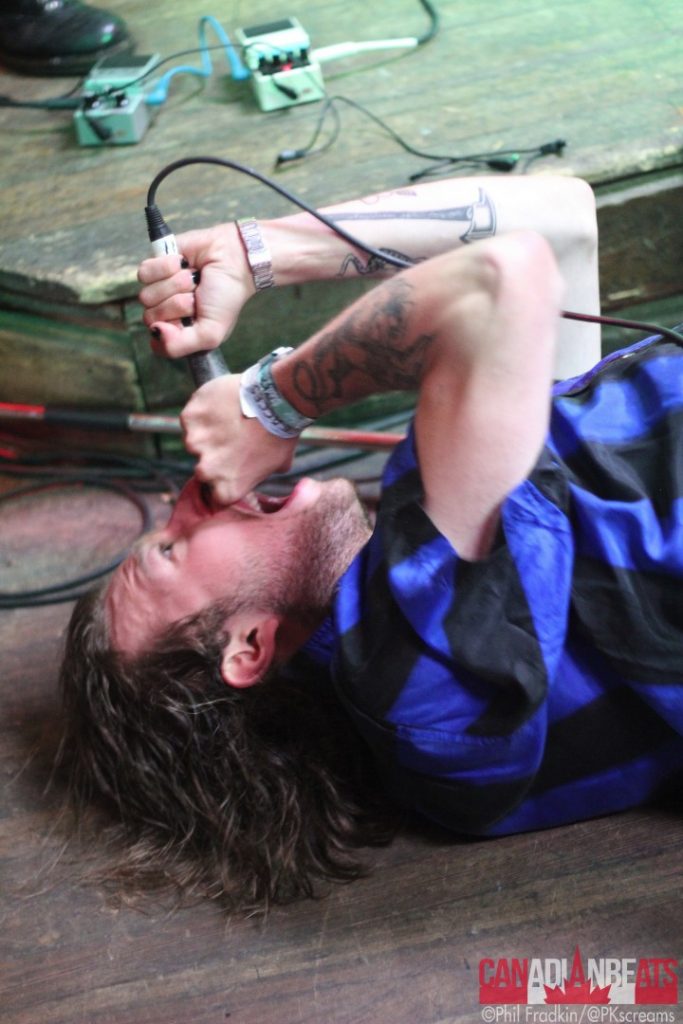 Janitor Scum was riling up their troops on the outside stage. When the front female vocalist hit the stage in rain-gear (granted it had been raining all day) I thought there was going to be some unpredictable moment. Right from the start, it was just that. Opening their set with a slide whistle solo. With muffled vocals on top of distorted guitars, this brought a whole new meaning to gutter punk. 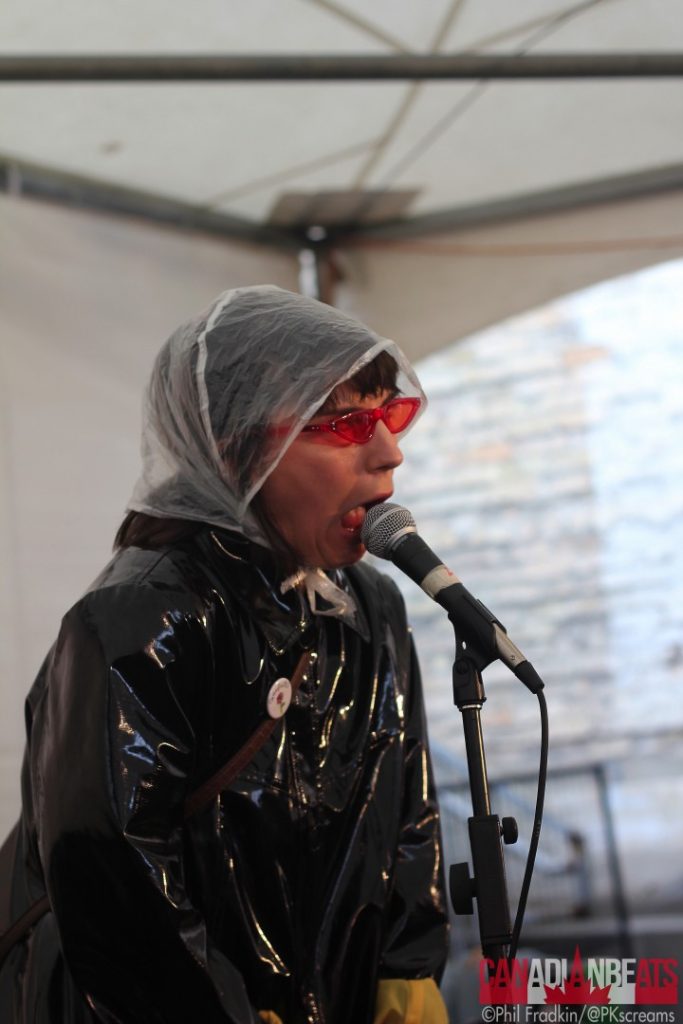 Body Lens was bringing their creative live twist on the inside stage. The vocals delivered in mainly monotone style had brought visions of old 70s greaser films. Instead of delivering through standard stage mics. The vocalist had been using a telephone receiver. Though nihilistic lyrically and delivering a shrill post-punk vibe, the entire crowd had gotten into the groove with the band in the just as grungy bar atmosphere. 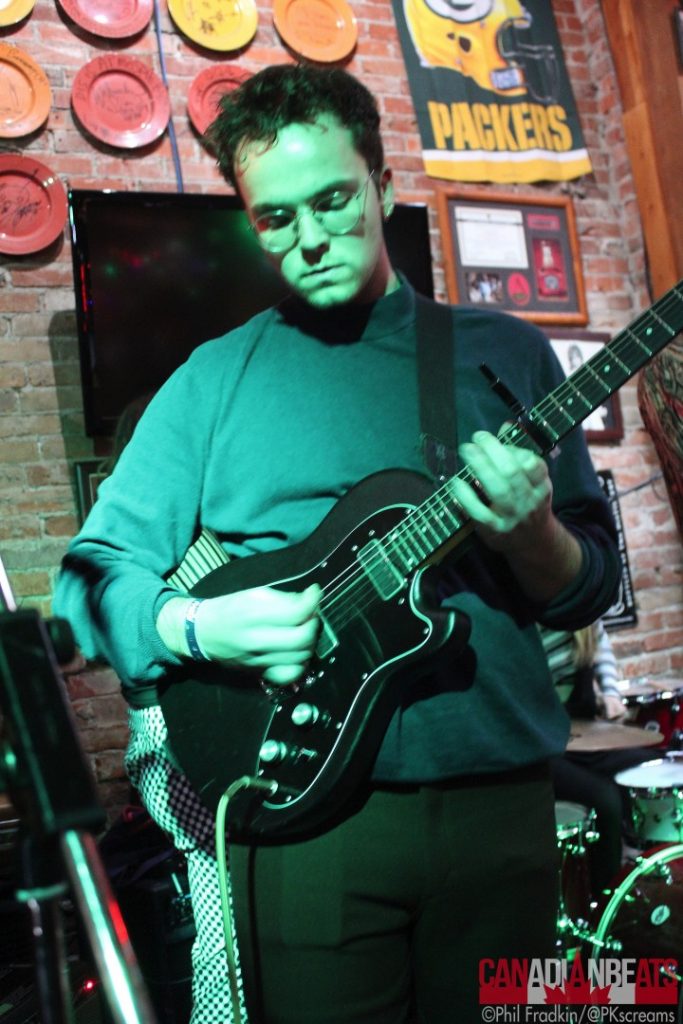 Hailing from Quebec, Victime distorted and aggressive instrumental sound seemed to balance with her thicker French accent on vocals, focused on the captivating tracks. Tho most of the audience had been jumping between the indoor and outdoor stage, due to the rain. There was not the largest attendance outside but still enough to make an out of city punk rocker feel welcome. 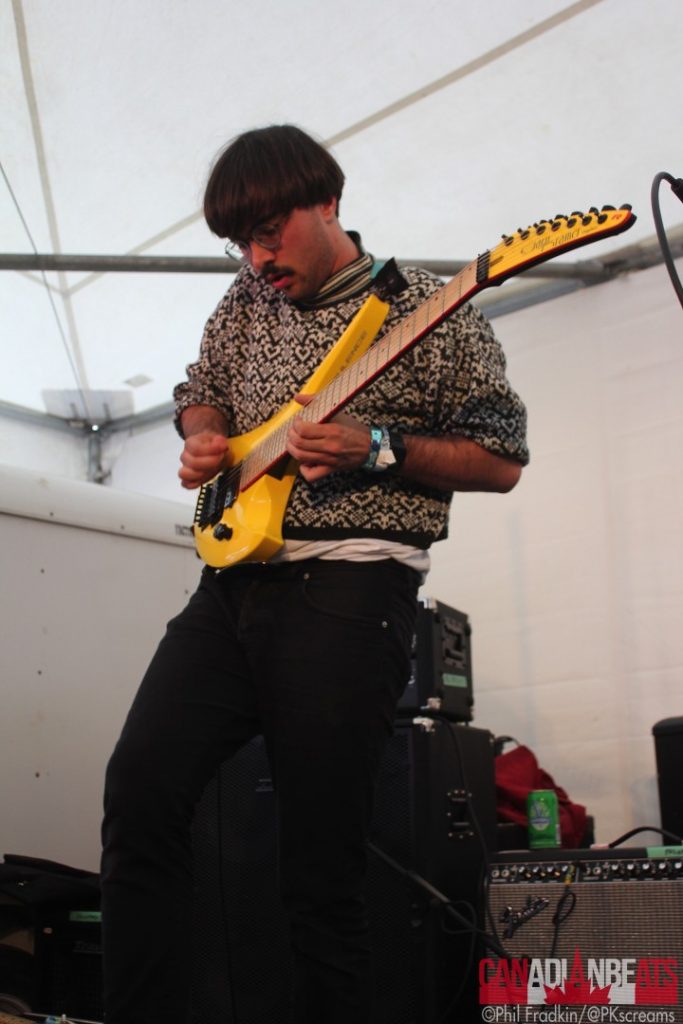 One of the final shows of the day that I caught was Slut Prophet. Originally the project started off with a lo-fi recording from Audrey Niksic and has turned into a four-piece post-punk performance. Not only did the band themselves bring the aggressiveness of a punk show but vocally though distorted focus more uncomfortable lyricism to unsettle the crowd and pull them in. While lyrical focused on the darker taboo subjects the band brings out an extra performer in a gimp outfit to interact and dance with the audience so they can forget their troubles. Seeing half the audience jump in and have fun while the other half was more hesitant showed the true meaning behind the band’s subjects and that there are still two-sides to every thought. 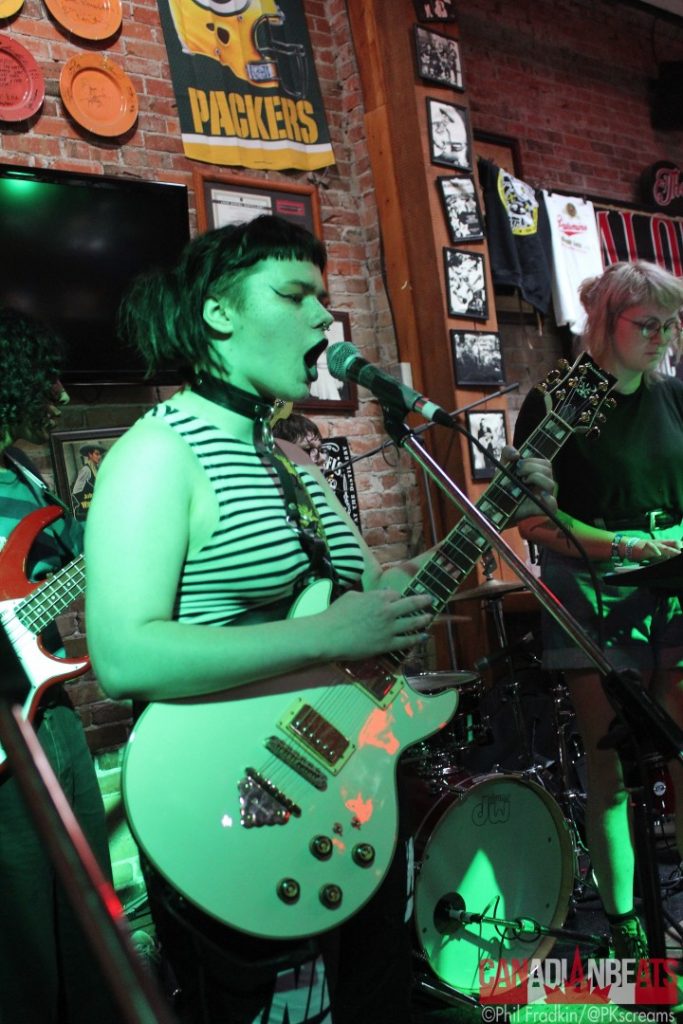 Ending the night a bit earlier today to try and rejuvenate for the weekend. I felt the need to check out another Sled Island curator’s (Deerhoof) pick. Hailing from the Boston DIY scene was Guerrilla Toss. As mentioned earlier the crowd seemed to grow more and more with each band. As I left a bit earlier I was informed that the entire parking lot was at capacity and that there would be no re-entry and spotted other fans watching through the barricades. Without losing their momentum, the band seemed to touch on a wide range of genres including funk, electronic and rhythmic-punk. Just like the instruments Kassie Carlson had used a wide range of yelps and spoke vocals to keep the audience engaged and bringing new fans in.

The wraps up the Friday night of Sled Island. With two days down to go there will be still a ton of great acts. Including a stop at the Block Party. Even though the end is just around the corner it feels like everything is just begging. Don’t forget to check back for more and check out the previous day reviews.