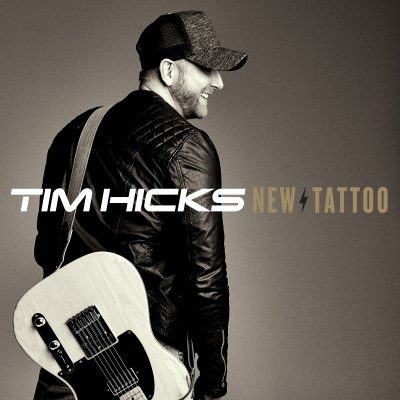 Tim Hicks has released his fourth studio album New Tattoo with longtime label Open Road Recordings. The Niagara-native has been steadily growing as a country artist and racking up a few accolades along the way. His collection currently includes a No.1 debut album, two platinum-selling singles, six gold singles, and three Juno nominations.

The 12-track album was entirely co-written by Hicks and features a ton of feel-good country anthems that the country rocker is known for. From the blazing opener and title track “New Tattoo” it seems like Hicks is set on the album feeling as fun and high-energy as he described in his recent press release – “I’m super-proud of my last couple of records, but I really wanted to make sure that fans and listeners could hear how much fun this album was to make,” says Hicks.  “So one goal going in this time was to not get caught up in what I felt people would expect from me and just get down to making music my way – having a good time and recording great songs.”

Chalk full of party anthems (“1975” and “Can’t Take It Away”), and some striking guitar solos (“The Beat’s Alright” and “Throw A Ball”) the energy never wavers. Hicks throws in a flirty ‘come hither’ type of tracks (“Gettin’ To Me”) and a sweet love letter (“Easy”). A personal favourite of mine is “What a Song Should Do”, a love song to country music and songs in general; the way they make us feel, how we use them to express how we’re feeling in a particular moment. Let’s not forget the sparkling duet (“The Worst Kind”) with one of music’s most exciting newcomers, Lindsay Eli.

Tim Hicks sets out to make a record that exudes excitement and feel good energy and that’s exactly what he does. This album has a little something for everyone; love songs, nostalgia, red solo cup party vibes; these songs are the product of an artist who genuinely wanted to make an album he could have the time of his life performing live and as fans, that’s exactly what we want and expect.