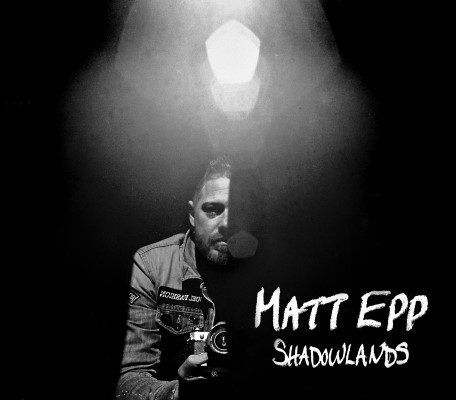 A veteran of the Canadian Music Scene, Epp embarks on an introspective journey beautifully embroiled in an atmospheric Americana backdrop that captures love, light, and the absence of each.

Recorded in the hills of Nashville, Tennessee at Dark Horse Recording with his band of merry men and Toronto pedal steel magician Aaron Goldstein at the producer’s helm. His accomplished ensemble includes, Jon Radford (drums in Steelism), Micah Hulscher (keys for Margo Price), ‘Champagne’ James Robertson (guitars for Lindi Ortega), Joel Couture (Matt’s long-time bassist), and the lovely background sounds of The O’Pears, Sweet Alibi and Brandy Zdan – they have tied the sonic landscape and narrative of Shadowlands beautifully together.

The album is a lush mix of country, rock and indie sensibilities, and Epp’s distinctive vocals are the magic glue that holds everything together. Musically superb, but with so much emotional depth you may need a life jacket. The album kicks off ‘Runaway’ replete with slide guitar. Tennessee written all over it, and the perfect intro, great backing vocals, and some sweet guitar licks.

Canadian Beats personal favourite is “The Bell’ a slower contemplative sojourn through a young man’s rite of passage. Reminiscent of his earlier works; “When You Know” and “They won’t find the bodies”.

The album touches on a plethora of messages; “Unnatural” a political statement of sorts. Dark but so, so good, as it builds to a ‘Dylan-like’ plea of “Open up your eyes”.

The most radio-friendly track on the album, and new single ‘Good Lover’ shows a different side to the album, and leads into “May I have this dance” a subtle seventies retro vibe, that we can see becoming a favourite of his new live set.

The album closes with the piano-led ballad “In a flash” a beautiful song that could easily double as a duet East Coast collaborator Christina Martin, the next time he’s in Halifax.

CB’s: “Now you are set to release your personal product out into the world, how does this release feel compared to previous albums?

Epp: “I’ve been working hard for the past few years in the writing and making of this album. I collaborated with the right producer for it (Aaron Goldstein) and got world-class musicians to play with me on it. I feel deeply about it artistically and it feels like a debut for me. I can’t wait for everyone to hear it!”

As last year’s winner of the prestigious International Songwriting Competition (ISC), Epp shares the honor with past ISC winners such as Vance Joy, Gotye, Andrew Bird and Passenger. He was also awarded a SOCAN No.1 Song Award in Canada establishing Epp as a true Canadian songwriting talent. He embarks on a full Canadian tour starting next week and will also tour Europe this summer.