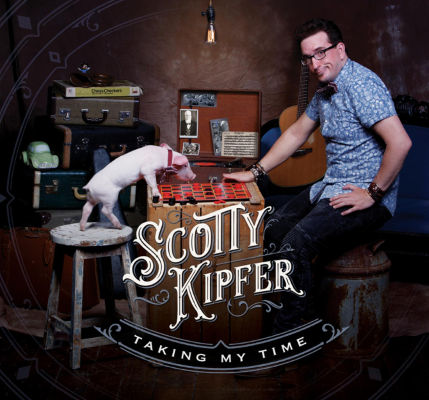 Canadian country music artist Scotty Kipfer, based in Cambridge, Ontario, not only has a new companion in his newest family member, Peter Porker, he also just released his debut album Taking My Time that’s already charting at #8 on iTunes. Kipfer spent the last 16 years supporting and helping to grow the careers of fellow artists and now it’s his time to shine.

This 11-track creation is rooted in Kipfer’s love of classic and 90s country music, with a twist of the modern pop sound that draws him to today’s country radio. There are duets that feature Janelle Arthur on “Long Way Home” and Emily Reid on “No Good Way”, each an aspiring artist in their own right. The Western Swing Authority is featured on “May the Good Lord Take a Liking to You.” It seems that Kipfer is still helping other artists grow their careers. Kipfer has an authenticity in the way he writes and tells his story and each and every track carries what has been the staple of his writing style.

“Falling Like the Rain,” the second track was released everywhere earlier this year. The video for this single was directed by Matthew Ninaber and produced by Jennifer Lloyd and can be watched on YouTube.

Because he has worked in so many facets of the music industry, Kipfer decided it was time to branch out and focus on his own songwriting. Says Kipper on his debut album,

“When I started writing, I really only wrote for other artists. I think the biggest evolution in my music was finally finding my own voice. When we wrote the title track on Taking My Time, I knew we had found me. Once we had that direction, the rest of the record came together very naturally.”

Kipfer also explains why he has Peter Porker on his album cover.

“When I found Peter Porker, I had no idea how much fun adopting a little pig was going to be. I had totally finished my album artwork back in February … but when I got thinking about my songs, the kind of record I made and the kind of guy I am, the idea of having a little pig on the cover was not only hilarious but totally representative of the project. So, I completely redesigned the whole thing.”

At long last, the time has come for Scotty Kipfer to come out of the shadows and step into the spotlight. And, what a spotlight it is!