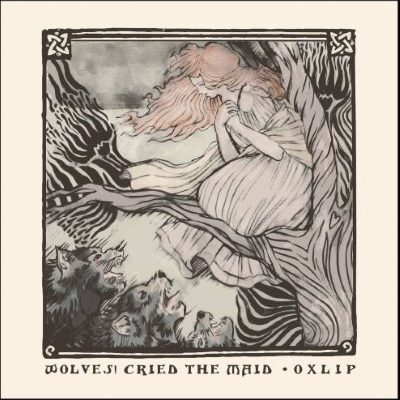 Oxlip has just released their sophomore album, Wolves! Cried the Maid, worldwide through World Peach Records. It features seven original songs, one cover, and one traditional tune. Jayne Trimble, the force behind Oxlip, has haunting vocals and unique songwriting talents that bring together a variety of genres that range from folk to traditional to modern indie. Geoff Hilhorst, Chris Mason, Shuyler Jansen, and Kendel Carson also played on the album, which created an experienced cast of musicians.

The album opens with the sounds of rain, transporting you to another place during “’Wolves!’ cried the Maid”. Her soft, yet powerful vocals pull you forward through the song as if you’re walking through a haunting memory. The instrumental is strategic, highlighting the vocals with soft acoustic hymns in the background, building instrumentally, and then pulling back again. The song is truly a back and forth between the instruments and the vocals, a constant and compelling tug and pull carrying you through the song.

As the album progresses, it gets more and more enchanting. “This Dark Hour” is particularly strong, maintaining Oxlip’s folky roots while adding in a bit of waltz and a bit of modern indie lyricism. The song is the first and only single release from the album, which premiered with us here at Canadian Beats on April 20th. Filmed by Nakaone Folk in Hope Slide, BC the video is cinematic and powerful, much like the music.

Overall, this album is the perfect package of folky traditions and modern music. If you’re looking for something you’ve never heard before, you’ve got to check out Wolves! Cried the Maid.