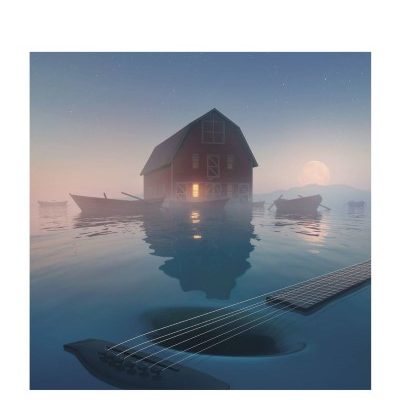 Canadian musician, filmmaker, activist and Survivor Man Les Stroud has returned with his second full-length record, Bittern Lake. His highly anticipated and long-awaited sophomore release follows his debut self-titled album, released in 2006. Produced by Mike Clink – yes, the Mike Clink, best known for producing one of rock & roll’s greatest records ever, Guns N Roses’ Appetite For Destruction – Les Stroud’s return is a wakeup call regarding the evident environmental crisis the world is facing – or in some cases, denying – and stands as an excellent example of Stroud’s ability as a musician and songwriter.

In an interesting choice for any record, Bittern Lake opens with a pair of covers. The first, “Death In The Wilderness”, is a lesser known track from J.J. Cale – the songwriter behind Eric Clapton’s “Cocaine” – creates a rich soundscape that revels in subtle instrumental parts underneath Stroud’s gruff voice. The adaptation reflects a mature sense of songwriting and excels with its use of minimalism that allows for Stroud to paint a bleak picture that has only gotten worse since the song’s original 1996 release. The pair of covers is topped off by a bluesy take on Joni Mitchell’s “Big Yellow Taxi” featuring a rich slide guitar and a dark harmonica. While the bar is set monumentally high for covering Mitchell’s material, Stroud approaches the level of the original while vastly surpassing the more famous rendition from Counting Crowes.

Of his original material, Stroud proves to be an excellent songwriter who can capture a true sense of gravity with his message. Musically, Bittern Lake straddles a unique sound that takes equally from acoustic rock, folk, and the blues, resembling Neil Young’s solo work. Songs like “The Legend Of Jeremiah Johnson” and “How Long” perfectly embody the folk-rock blend of the album while “Any Minute Now” is a stunning blues track that is driven by slinky electric guitar lines that weave around Stroud’s vocal melodies. His songwriting truly shines through on Bittern Lake, front to back.

Whether it is for the music or the environmentalism that rest at the heart of the record, Bittern Lake is an excellent album that showcases Stroud’s ability to write sophisticated songs as well as adapt material from other artists in a manner that fits seamlessly with his own work while also pumping them full of life for their modern adaptation, making Bittern Lake a record that you simply must listen to.