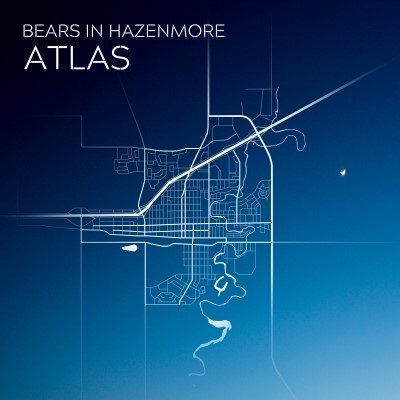 Bears in Hazenmore are an ambient alternative rock group hailing from Regina, Saskatchewan. Formed in 2014, the band has been honing their songwriting craft along with their intricate ethereal arrangements. This five-piece ensemble, use an array of shimmering reverb-saturated guitars, dynamic percussion, ethereal brass and woodwind textures.

Their debut Bears in Hazenmore EP was released in March 2014, and the songs “Winter Air” and “These Northern Mountains” gained national recognition through CBC Music contests Rock Your Campus (2014 National Top 10) and Searchlight (2015 Provincial Top 10) respectively. The band released their second EP Airwaves in August 2015 touring extensively across Canada since then.

After working together at a summer music camp in 2016, the group began an ongoing collaboration with Saskatchewan-based singer-songwriter Megan Nash. Bears in Hazenmore has arranged full-band parts for Nash’s music and even performs as her backing band. The collective has toured throughout Canada, including spots at Gateway Festival in Bengough, Saskatchewan, Folk On The Rocks in Yellowknife, Northwest Territories, and Halifax Pop Explosion in Halifax, Nova Scotia. Their worked together yielded Nash’s acclaimed album Seeker in September 2017.

Bears in Hazenmore’s upcoming full-length album Atlas was recorded in Regina in Spring 2017 with Justin Bender at Blue Door Recording, mixed and mastered by Rob Morrison at RMS-LABS. The record features ten songs centred thematically on memory and its tie to specific locations. The band pushes their ever-evolving sound with intertwining guitar and horn textures, contemplative lyrics, and irregular time signatures. The album features thematically linked tunes based on memories and their tie to specific locations. For the album booklet, we have the map of a significant location for each song, hence the album title, Atlas. The maps were beautifully recreated by our talented friend and local Saskatoon artist, Kelsey Chabot.

Canadian Beats recently asked the band about their writing process, and production techniques. “When we write, we find a spot in rural Saskatchewan and then isolate ourselves there for few days. Usually one of us will bring in an idea and we’ll work together on it from there. Sometimes those ideas are fully written songs that only need some arrangement; sometimes they’re just a chord progression or a melody. We use a lot of effects in our music like delay and reverb to create ambient textures.”

ATLAS begins with “Beneath the Ice” an uplifting track and the perfect opener. It highlights the band’s growth in musical style and arrangement and crystalizes where the band are musically today.

“Wedding Season” encompasses a catchy arrangement with the addition of strings and wind instruments that cocoon the album stylistically and the soaring vocals are truly sumptuous on the track.

Stand out track for Canadian Beat’s and lead track from the album is ” In Your Head” and it certainly does just that. That special something where you think you may have heard it before. Polished, great guitars and a pounding percussion; radio-friendly personified.

“Caves” draws obvious Dallas Green comparisons. It’s a beautiful track and has a passion that is complemented with the distant trumpet. The wind section is highly evident on ‘Eau Claire’, another atmospheric build and this subtle but distinct backing ensemble sets the band apart from the current crop of indie/hipster wannabe’s.

ATLAS is released June 15th, 2018, hot on the heels of the band somewhat unconventionally finishing a cross Canada tour. There will be more dates to follow this summer, so keep your eyes open, and check their website regularly. ATLAS is must-have for your next trip to the beach or cottage country.

Recommended Taster Track: ‘In Your Head’