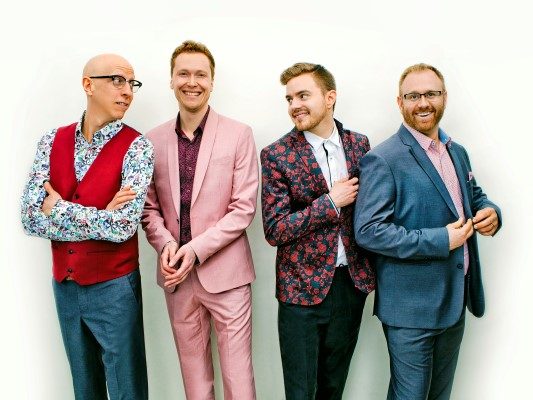 Toronto, ON-based a cappella ensemble, Cadence has four albums under their belts including Cool Yule (2011), Speak Easy (2010), Twenty for One (2005), and Frost Free (2000). The band is on the verge of releasing their fifth studio album, Home. The four-piece vocal group which is made up of David Lane (baritone and bass), Ross Lynde (tenor), Lucas Marchand (tenor), and Kurt Sampson (bass and vocal percussion) have won or been nominated multiple times for numerous awards including three nods from the JUNO Awards and 10 from CARA.

The members were born in four different provinces spanning from BC to PEI, and their newest single, “The Watcher on the Rock (Slhx̱í7lsh)” features elements from both coasts.

When asked about the track the band comments,

“There is a rock in Stanley Park at the entrance to Vancouver Harbour that lies on the traditional territory of the Squamish Nation. The words for this song were inspired by a legend that tells of a young warrior who defied The Creator in his mission to ensure a spotless life for his unborn son. Impressed by his commitment to future generations, The Creators’s agents transformed the young man into an indestructible monument to Clean Fatherhood, the rock called Slhx̱í7lsh.”

Today, Canadian Beats is happy to unveil their video for “The Watcher on the Rock (Slhx̱í7lsh)” which was shot at Irving Nature Park near Saint John, NB. Check it out below.