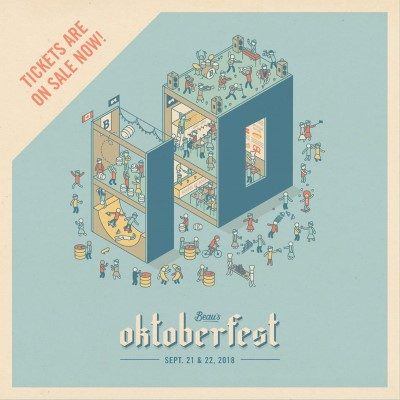 Smackdab in between Ottawa and Montreal lies Vankleek Hill.  The name may not be recognizable to those outside of Eastern Ontario, but Vankleek Hill is known across Canada for one thing: the hometown of Beau’s Brewery Company.

To celebrate their continuing success in the community, Beau’s will host their 9th annual Oktoberfest, September 21 and 22 at the nearby Vankleek Hill Fairgrounds.

The ever-popular Lug Tread will be on tap as beloved East Coast folk rocker, Joel Plaskett brings his band, the Emergency, to headline the festival on Friday, September 21; with support from punk rockers the Flatliners, electro-pop artist Wolf Saga and classic Canadian ska performers, the Kingpins.

On Saturday, September 22, Nova Scotia will continue to be well represented as Sloan bring new tracks from their latest release, 12, to the folks of Vankleek Hill. Polaris Prize-nominees Weaves, as well as Montreal hip-hopers, Dubmatique, and beloved children’s performer, Fred Penner are also scheduled to take the stage.

Hosting the entire event will be podcasters Taggart & Torrens (that’s former OLP drummer Jeremy Taggart and actor Jonathan Torrens for those who don’t know!), and will include performances by Canada’s king of polka, Walter Ostanek.

Tickets are now available at http://www.beausoktoberfest.ca/.  Camping, as well as buses to and from pick up spots in Ottawa and Montreal will be available all weekend.