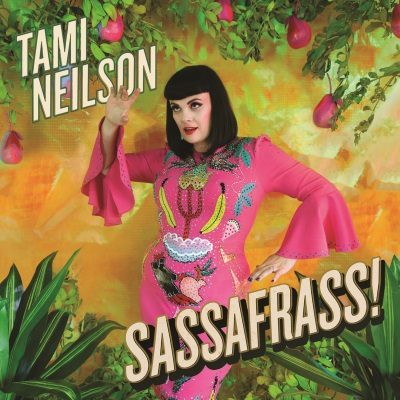 I have been sitting here for 45 minutes staring at a blinking cursor with tears in my eyes wondering how can I, with my limited resources and ability do justice to an album that is so far beyond me, I’m almost afraid to write. Jesus Christ. What do I say? How do I say that Tami Neilson‘s latest album Sassafrass! stirs the soul to healing? I can only begin by saying that I listened to Sassafrass! three times before writing a word. Even in this sentence I’m stuck again, wondering how to write. There are very few artists who move me the way Tami Neilson does. Mavis Staples, Townes Van Zandt, Sam Cooke, Nina Simone, Janis Joplin, Bessie Smith are a few but the one artist who stopped me dead in my tracks and left me in the same place that Tami Neilson did, filled with awe and wonder, is JJ Grey and Mofro.

“How many more days can you hold on? How much longer can you wait, she asked. There was a time I thought I could answer, but my tongue gets tied and my thoughts slip away”

-The Sun Is Shining Down

JJ Grey found his way to me at one of the lowest points in my life. I fight, and rage against a past where I deal with the terrible fallout from childhood sexual abuse and other trauma. When booze and drugs stopped working, music saved me time and again. It’s the one steel string that refuses to be broken. When I first heard JJ Grey I felt light, laughter and a healing that I hadn’t felt in… … …ever. I never thought I’d feel that connection, that same sense of wonder and awe again. I was never more glad to be wrong. Tami Neilson’s Sassafrass! is a cool breeze on hot skin, a fire starter in the soul and, in my opinion, Juno and Grammy worthy. First of all, I love the title Sassafrass! which for me has a different connotation than just a great word for sassy. I’ve always said that gumbo ain’t gumbo without Filé powder. Filé powder is literally the ground up leaves of the Sassafrass tree and the Filé is what brings the gumbo together, thickens it, deepens it and makes it whole rather than a bunch of disparate ingredients in a pot. In the album Sassafrass! the Filé is the utter genius of Tami’s songwriting and a voice that is limitless in its conveyance of an entire lifetime of experience. The first note I actually wrote was “If Mavis Staples and Amy Winehouse could be one singer it’d be Tami Neilson. Through the album I kept  thinking how much fun it must be playing this music in her band. There is not a single misplaced note, phrase or track where I said to myself “Meh, that missed for me.” Tami, Ben Edwards, Jay Neilson, Native Tongue and Outside Music did an amazing job producing, mixing, recording and publishing Sassafrass! As everyone knows by now, I hate talking about genre. I despise pigeon holes and little boxes and borders that some people, especially in music, seem to have a degenerate’s fetish around ascribing music to some kind of perverse periodic table of musical elements and if you do that here Sassafrass! or anything really, you miss the music.

Sassafrass! has 11 tracks that leave you wanting more. The album starts with the track “Stay Outta Of My Business” I loved the raunchy horns and at one point Tami holds a rising note that is matched by the horns blending into one voice. It is astounding. If you ever find yourself dancing to this track, a middle finger up in the air would be an appropriate fuck you to the ignorant, the misogynists, the haters and the judgments that Tami punches in the throat with a lyric like:  “A woman stay home to raise the babies, must be nice to do nothin must be lazy. And so she go out to make the money, how can you leave the babies you’re a bad bad mommy.” There is a very sixties guitar chop and don’t think for a second, Brett Adams, I missed the Dick Dale guitar on the outro. “Bananas” follows and is outrageous. My notes say verbatim “Bwahahahahaha a giant fuck you through a sultry grin.” Oscar Wilde would have loved this song as it makes people laugh at themselves without realizing they are the ones, me included, who are being satirized. The song has guitar solo right out of Marc Ribout who was Tom Waits’ guitar player for years. Also in the Tom Waits vibe is the track “Diamond Ring” Tami mentions Hymn 23 in the song which to me, as a lapsed Catholic, was interesting. I kept wondering if that choice of Hymn “Worship Of The Father” was intentional as the song seemed to be a prayer unto itself as a declaration of independence not only from men who seek ownership and see women as baubles but from the ultimate patriarchy of religion. Or as Todd Snider always says about songwriting, because it rhymes. I loved the tremolo in the guitar through the track. This theme continues on to a favorite track of mine “A Woman’s Pain” where lines like “The hand that holds the power, assigns the blame.” And “This old world turns on a woman’s pain.” I wrote a love poem once to a woman’s eyes, with nobody in mind just their eyes. “Eyes filled with unbroken secrets and as ancient as the pain of women” obviously Tami’s writing here resonated with me as did the stripped-down sound and haunting pedal steel. My notes on this track say “What a great fuckin song. Janis Joplin vibe.”

My favourite song in the last ten years is JJ Grey and Mofro’s “Brave Lil Fighter” from the brilliant album Ol’ Glory. “Devil In A Dress has the same kind of fire. There is a hollowness of sound in the song that makes it more of an enchantment than a song. One line talks of a “one dimensional fantasy” which is so strange in a multi-dimensional track. And in a total departure “One Thought Of You” is so retro that you could hear this song at 8588 Sunset Boulevard, where Club Mocambo stood in the 1940’s. You can picture Charlie Morrison’s club filled with smoke and where stars like Clark Gable and Rita Hayworth, Jimmie Stewart and Errol Flynn hung out as regulars. “Miss Jones” follows and is an up-tempo, anthemic wall of noise with a fade out to nothing. Continuing the roll of great song after great song “Smoking Gun” is slow sultry and sexy. Tami’s voice on this track is so sexy she could sing the phone book and captivate an audience. The tone of the song seems to be in direct contradiction with the subject matter which I took away as the Weinstein “culture” where misogyny and the abhorrent behaviour of men were finally shown to the world as the fuckin monsters they are, and with any luck, will be ground in the dirt. The lines “Dark and dirty closets ‘neath the Hollywood sign.” “Paid up the ransom in flesh.” “Paid up to the piper to destroy or bless.” The track has a definite 60’s Dr. John vibe. “Kitty Cat” has brilliant imagery and a wonderful message that affection in no way means ownership. There is a special place in my heart for “Manitoba Sunrise at Motel 6” On this track Tami again shows her amazing range in a sad, lonesome and lonely song in the absolute best tradition of country music. I lived in Winnipeg for years, but my first winter there, I remember walking on the river and stopping at the statue of Louis Riel. I remember writing about a man who was a father of Confederation but also as a man whom history never forgave. Staring resolutely south, Riel looked so lonely with snow falling around him and the wind pushing south does hit you in a way that leaves you feeling alone, detached and at odds with everything but the broken moment you are captured in. Life on the road is tough, on the road through Manitoba is soul-testing in winter. The final track on the album is the longest. A surprising love song called “Good Man” My raw notes say “Jesus Christ, Sam Cooke, Otis Redding, Marvin Gaye or Percy Sledge could have recorded this track. It is straight up soul music. The lonely bass and echo from the guitar reminds me of the best of Soul. I thought of Aretha and Lenny Williams and smiled. The chorus is everything that is great and true in music which gives it grace. I mention men in this part of the review because this track at either Stax, Motown or ABC records would have been recorded by a man. This style of song was the sole domain of male artists, with the exception of Aretha, and I found it so refreshing to hear a woman sing a type song owned by men for far too long.