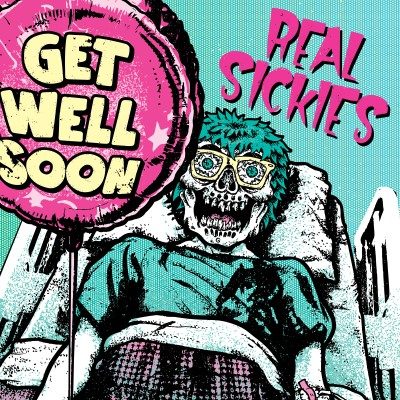 **Spoiler Alert: Real Sickies’ debut release Get Well Soon is one of the most fun, and one of The Riz’s most favourite, albums of 2018! **

Albums need more cover art with skeletons on them.  Straight up. Needs to happen.   This is not an opinion, instead a matter of public improvement.

In the great subgenre which is officially now labeled as “Skelet-art-al” (I’ll work on that), Real Sickies come out swinging – boney elbows up – with their debut release Get Well Soon, 13 tracks of straight ahead old school ‘60s rock and ‘70s punk with modern sensibilities and swagger, Ramones meets the Smugglers with a dash of Chixdiggit and the Black Haloes kinder younger brother releasing an album for Fat Wreck Records.

Prepare for gang vocals and hand claps to abundantly abound!

Get Well Soon is seriously-fun, without being overly serious, great record for old-school punk fans, and driving rock fans, alike.   Put on your red and green 3-D glasses, your rattiest (or neatest) pair of Chucks, and “Rock ‘n Roll High School” dance party all over your room!

The title track “Get Well Soon” kicks off with a hooky, room mic guitar and driving unison riff that sounds like the song that is be being played by Teenage Head on the cover of Frantic City.   “Cool Club” opens with a proudly called off “1,2,3,4!” making it an automatic instant classic as is any song with a “1,2,3,4” called off intro.

“Very Large Fatigue” has a mid-80s “Pretty in Pink” soundtrack vibe.   The big classic saxophone solo at the top of “Everywhere You Go”, which also has a “1,2,3,4” count off making it a bigger double classic than a double quarter pounder with cheese, is a shoe-in for the Grease reboot soundtrack.

The only thing that would have made “Some Are Mimes” more effective is if there wouldn’t have been any vocals.  Just sayin’.  The wordplay between “Some Are Mimes” and “Sumer Time” more than makes up for the inclusion of a lead vocalist.

Under a half hour long (using dubious mental math) Get Well Soon will make you well faster than meditation, mindfulness, or multivitamins!

Real Sickies’ debut release Get Well Soon is one of the most fun, and one of this reviewer’s most favourite, albums of 2018!  Go get it!