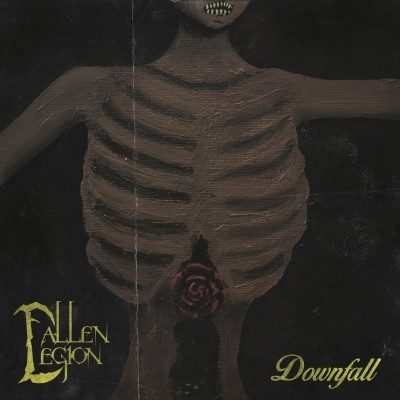 On May 18th, Oshawa, Ontario’s Fallen Legion dropped their latest EP, Downfall. This is their third EP following Infinite Archives (2015) and Screams From The Dungeon (2012). The band brings and fuses influences from Gojira, Korn, Iron Maiden, and Dethlok with its deeper lyricism and heavier tunes. The EP has something for all metal fans.

The first single “Monster Reborn” kicks off with a melodic and slower downplayed tempo. Before kicking in with that Korn vocal styling. This track is one of the more obvious fusions of older metal and nu-metal, which brings a fresh flavour to the genre and album itself. Though while experimenting with various styles of metal, the band still welcomes more serious subjects to their lyricism. With lyrics such as “ever since I was very young voices have always answered questions for me from the depth of my head is there some one else here inside”. Bringing the conversation of mental health to light.

“Way Out” is another track of the EP, similar to “Monster Reborn”, the track focuses on mental health issues with lyrics such as “this is the only option this is the only answer tonight, my soul will falter now emptiness is this bliss”. Yet approaching it with a more aggressive styling right from the fist note. The track brings a nicer balance similar to a few other ones to the album. With the aggressiveness hitting you for the whole track it keeps the listener on the edge of their seat. Fallen Legion is a band that isn’t afraid to bring what they want to the table without expecting every listener to enjoy it. They are raw, fresh, fun, and will have you head-banging in no time.

The band has stated  “This EP is about dealing with stress- mortal blows, drugs, thoughts of suicide, the inner struggle, and the wrath of it all. The EP represents the outcome of painful experiences. Songs like ‘Escapegoat’ deal with not being able to handle the consequences of one’s actions and pushing them onto those weaker than yourself, and ‘Monster Reborn’-about letting the guilt build up inside, trapping one within their own mental anguish.”

The EP is available now on their Bandcamp. With such subjects as drugs, inner struggles, and the darker aspects of life mixed in with classic metal such as Iron Maiden and newer stylings of Gojira, the album will unite all metal fans for an amazing time.