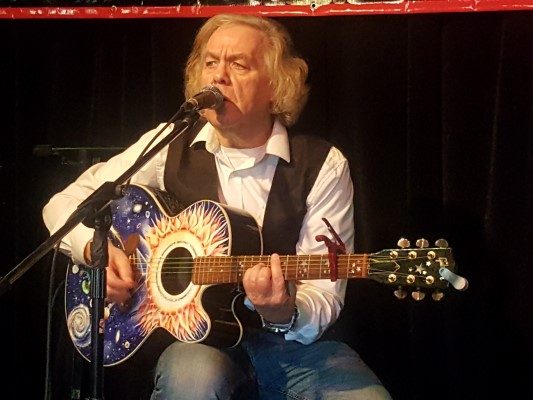 Brian Gladstone is no stranger to the Canadian roots music scene with almost thirty-five years as an artist, performer, singer-songwriter, producer, festival director, and activist. On June 14, Brian will be releasing his new album, Brianology at Hugh’s Room Live in Toronto. Gladstone will be accompanied by a full band including Tony Quarrington, Beverly Kreller, Bonnie Gladstone, Noah Zacharin, Tony Laviola and more. Doors open at 6:00 pm, music is from8:30-11:00 pm and tickets are $25 adv. HERE. $30 at the door.

Find out more about Brian in our newest segment of Five Questions With!

I’ve been involved in the Canadian music scene for thirty-five years as a performer, singer-songwriter, world-class fingerstyle guitar player, promoter, and festival director. I have released five albums since 1999, all of which have garnered significant local and international airplay and critical acclaim. I have played more than 1200 shows and continue to perform. I also run a weekly open stage Dr. B’s Medicine Show, in Toronto at the Free Times Cafe, on Saturdays.

I was influenced by the folk revolution in the early ‘60s through ‘70s, and much of my music is reminiscent of that style. Early in my life I discovered the power of music as an expressive medium, and use my recordings and stage performances to both entertain and to make a social statement towards improving the world. I try not to follow conventions when writing, avoiding lyrical and musical clichés, to generate a unique, original sound called ‘Brianology’ (which is also the name of my new album.)

My next show is the release concert for my new album Brianology at Toronto’s Hugh’s Room Live, on June 14th. The live performance is totally acoustic, with no electric instrumentation. Also, we don’t use drums, but instead use organic percussion with wood and nature sounds. We feature simple arrangements in the folk, bluegrass, and roots style; with multiple part vocal harmonies and world-class guitar playing.

“A Song For Everyone”

There are many current albums and artists that I appreciate, but my favourites still harken back to the salad days of folk and roots music, the ‘60s and ‘70s, with artists like Joni Mitchell, Buffy Sainte–Marie, Gordon Lightfoot, Bruce Cockburn, and The Band.