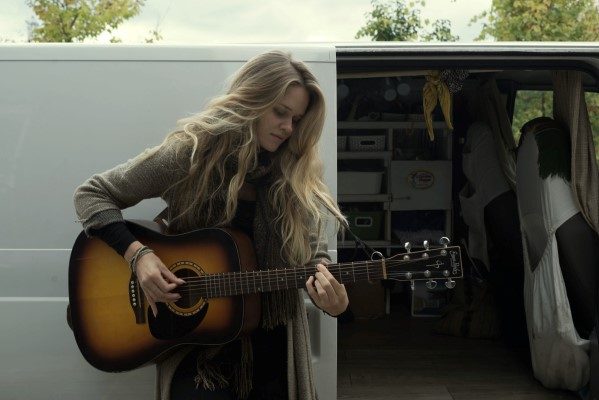 Toronto, ON-based singer-songwriter, Kalyna Rakel is about to release her album, Before & After You on June 15, 2018. She has also created her own comic book to go with the CD and vinyl, as she is a graphic artist, as well. Today, we aid her in unveiling the brand new lyric video for her single, “Who Knew”.

Kalyna shares on making the video,

“I wanted to make a video for the single “Who Knew” that would be memorable while drawing attention to the lyrics and story of the song. I floated the idea of a standard lyric video, hiring an animator to generate the text and put it to music, but it felt a little synthetic for the sound and feel of the album. In the end, it felt truer to the earthy sound of the album to take a marker and construction paper and draw out the lyrics myself, by hand, in the kitchen.”

“With ‘Who Knew’ I wanted to take a budget of $12 and a lot of coffee and make a video that pops off the screen and tells a story. I like the video and I hope you do too!”

Take a few moments and check out the single and accompanying lyric video below, and find out more about Kalyna in our Five Questions With segment.

Hey! My name is Kalyna Rakel, I’ve been making music as long as I can remember and I released my first album when I was sixteen. I moved to Europe for a record deal, realized it wasn’t for me and spent a year travelling around and playing music on the streets for tips. During that time I taught myself to play guitar and have since independently released three more albums of my music and travelled around the US and Canada sharing it with people. I’m still independent and still blessed to be able to write and sing my songs full time and am excited to be releasing a new album this week!

For me, the best feeling in the world is when I can sit down and put everything I’m feeling into a song. It can sometimes be hard to understand why I get angry or stressed and I find everything just pours out when I pick up the guitar. While writing the new album, ‘Before & After You’, I was going through a lot of changes, letting go of past relationships and opening myself up to new ones. The first half of the album is about all the frustration and confusion that comes with looking for love and the second half is more about my process of letting go and letting happiness find me.

I’ve got a show I’m really excited about on June 26th at the Burdock Music Hall in Toronto. I’ll be releasing the new album backed by a six-piece band, featuring Kevin Breit on guitar as well as some of Canada’s best young musicians. When I play live the main thing for me is to feel a connection to the audience. I want every song to resonate and tell a story, and the Burdock is the perfect intimate venue to do that. I play regularly in the GTA and will be touring the album later this year, so if you can’t make that show check www.kalynarakel.com/shows for more dates!

I’m always most excited about the latest music, so I would have to say Who Knew! Since you’re already here though, I’d probably suggest So Removed. It’s a jazzier song from one of my older albums, but people often tell me it’s their favourite and I love playing it live!

There’s a pretty amazing music scene right here in Toronto! In my van I’ve got CDs by local acts The Vaudevillian, The Layrite Boys and Danielle Knibbe that all get a lot of play and I’m obsessed with the latest by Snowblink, Feist and PUP! My absolute favourite Canadian artist is Kevin Breit though, if you get a chance to see him live I highly recommend it. As well as being one of the best songwriters he’s an incredible performer, an absolute Canadian treasure!