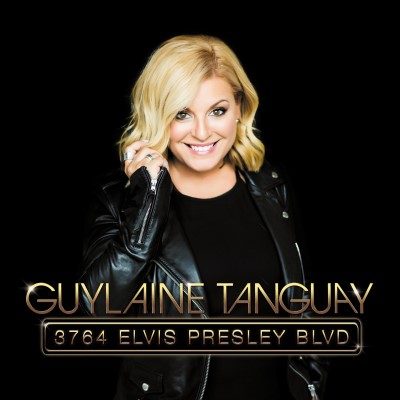 3764 Elvis Presley Boulevard is the most recent album release from Quebec country music superstar, Guylaine Tanguay. The new album is a direct homage to one of the most influential artists of all time, Elvis Presley. Often referred to as the “King of Rock and Roll” there is no doubt that the lasting legacy of Presley has continued to amaze us almost 41 years since his untimely death in 1977. To date, Presley has sold more than 250 million albums and continues to stay relevant as his music continues to attract new fans every single day.

3764 Elvis Presley Boulevard was inspired by a recent trip to Nashville/Memphis, Tennessee which included a stop at the home of Elvis Presley. Tanguay took some time during her trip and visited the famed Graceland Mansion which is located at 3764 Elvis Presley Boulevard. Graceland, which is home to the grounds and mansion that were once occupied by Presley and his family now house his career museum, car collection, private planes, and all things Elvis. Second to the White House, Graceland is one of the most visited places in the United States alone.

Choosing the songs for the new album was no easy feat. Presley’s musical library is vast and large, but Tanguay and her team managed to narrow the album down to 13 of some of Presley’s greatest and well-known songs to record for 3764 Elvis Presley Boulevard. The album’s first single “Burning Love” was released and allowed fans to get a first taste of what they would be in store for with the new album. Tanguay released a music video showing off the new song and her new hairstyle. Armed with fresh arrangements and a passion for the music, Tanguay hit the studio in both Nashville and Memphis to record the new versions of these great songs. Under the direction of Steve Mandile, each song stays true to its original version but has that Guylaine Tanguay flare that we have come to know and love with her previous albums.

The album opens with “Burning Love” and sets the stage for the whole album. You can instantly hear how progressive the arrangements are from the first few notes. I loved the “twang” that was added to “Burning Love” and how it really countrified the sound of the track. The fusing of country, rock, soul, and the pure power of Tanguay’s vocals is captured beautifully throughout this record. “Suspicious Minds” has always been one of my favourite Elvis Presley songs and there are some great versions which have been recorded and released over the years, but I was happy to see it made the cut to be included on this album. Tanguay takes a softer and delicate approach to the song to keep it close to the original but uses her vocals to give the song just the right amount of musical love it deserves.

3764 Elvis Presley Boulevard is a great balance between some of Presley’s rocking and edgier tunes, as well as the ballads that Presley made famous with his signature style and vocals. Tanguay performs with so much emotion and conviction on some of the great love songs such as “Can’t Help Falling in Love,” “Love Me Tender,” and “Are You Lonesome Tonight.” Tanguay’s version of “Are You Lonesome Tonight” has a special spoken-word part of the song that I think mega Presley fans will particularly enjoy. I also really enjoyed the medley created out of “Don’t Be Cruel” and “(Let Me Be Your) Teddy Bear.” I thought the pairing of the two songs was a sweet idea and complimented the stories each song tells. It was also a great way to add another song into the mix of the album.

Tanguay powers through the upbeat tracks with a swing and edge that show off exactly how dynamic her voice and talent really is. To go from performing some of the most classic country songs known, to the music of Céline Dion, and now onto the iconic sound of Elvis Presley is not an easy task. Tanguay really shines on some of the major toe-tappers such as “Heartbreak Hotel,” “Jailhouse Rock,” and “Blue Suede Shoes.” You can almost hear how much fun that Tanguay and her musicians must have had recording these songs in the studio. When it came time to record “That’s All Right Mama,” Tanguay took to sacred ground to record the new version at the world famous Sun Studio in Memphis. I can imagine just how truly special that must have been for Tanguay and her musical team. With so much rich musical history created there, that would be a major career highlight for any artist.

Overall I strongly think that 3764 Elvis Presley Boulevard is not only a great new album from Tanguay but also a great album for any fan of Elvis Presley. 3764 Elvis Presley Boulevard carefully preserves the music of Elvis Presley and does not disappoint the listener. As a fan of Presley’s music, you have to appreciate the effort Tanguay put into this album and hear that effort throughout each track. Many people try to replicate Presley’s music by creating nothing more than a carbon copy of his original style and sometimes that can be a hit or miss, but I would call 3764 Elvis Presley Boulevard a home run. I was impressed with the elements and arrangements that set each track apart from the original recordings of these songs but didn’t make them unrecognizable. Tanguay performs these songs with ease and comfort. I think Presley himself would have been impressed to hear this album and given it his own nod of approval. 3764 Elvis Presley Boulevard is available digitally and physically through your favourite music retailer now. You can check it out on iTunes or Spotify. You can also expect to see Tanguay on the road throughout the rest of 2018 and some dates for 2019 are starting to fill up her busy schedule.