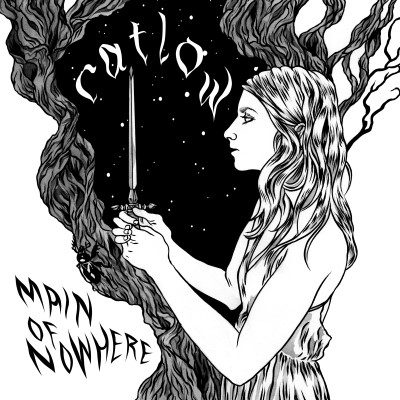 Vancouver alt-rock outfit, Catlow share with the world their new LP, Main of Nowhere – out today. The LP is a culmination of clean, but haunting vocals over spacey guitar hooks and bubbling basslines, married together by shimmering synths. Main of Nowhere tells stories of love and loss, growing as a person and moving on. Lead vocalist, Natasha Thirsk says the album, “is about being in the seemingly main part of your life but at times, moving forward and growing seems like you’re getting nowhere.” She continues that it was “years of personal trauma and health issues, mental illness and trying to get better and taking hold of what heals [her]  the most…MUSIC.”

Album opener and lead single, “Scrapes” welcomes the listener with its jangly guitar and clean vocals. With its bubbling bass and rhythmic synths, the track creates a rather cheerful and summery vibe. The album’s opening double threat is secured by second track “A Moment Passes By”. With its punky guitar and shoegaze influence, the track definitely sounds like it could fit well in a ‘90s teen flick. This is an interesting track because its Rush-like vocals no doubt have some Classic Rock influence, yet Catlow manages to put its own alternative twist on it with its spacey guitars, making the song sound more atmospheric.

Main of Nowhere’s sound begins to deviate from what the first two tracks had to offer with “My Sun”.  This track has a more of a, rather unexpected, folky, country vibe to it. The exact opposite of this track is “Settle Up”. The track opens up with rather ominous sounding synths with matching vocals. Its powerful guitars make it sound like the sensation with the pop-punk genre that was sweeping the early aughts.

Title track, “Main of Nowhere” opens up with a very gripping bassline and smooth vocals. This atmospheric track urges for some honesty: “You gotta give me more/ you’ve got to say what’s really on your mind”. Like the track before it, “Main of Nowhere” also shares hints of pop-punk summer anthems of the early aughts. However, with just enough reverb and stellar harmonies – it maintains a shoegazey twist.

The album closes off with “Forget the Rest”. This final track changes up the album’s sound once again – its strumming guitar and soft vocals leading to a more indie folk sound. It sounds more open and vulnerable than its preceding tracks: “don’t pretend you don’t feel the same as me/ don’t pretend your heart won’t break as easily”. Its gritty, atmospheric guitar really seems to express and emulate the frustration of its lyrics.

With Main of Nowhere Catlow really shows what they’re capable of. Switching up between genres and styles between songs is a pretty ambitious thing to do in a single LP, yet this Vancouver band does it flawlessly. Main of Nowhere offers relatable storylines in its lyrics but keeps each track new and fresh by embodying a new sound.