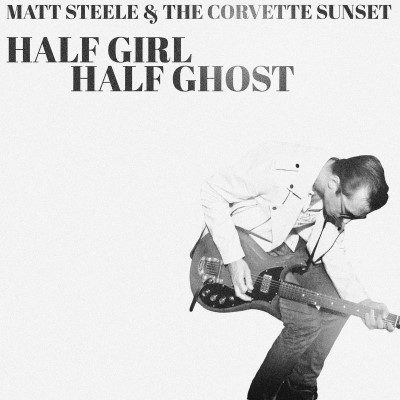 June 7th, 2018 will mark a day that Matt Steel & The Corvette Sunset will never forget as it marks the release of their debut album Half Girl Half Ghost.

Every album as a backstory and this one is no different. According to the band, they channelled many culturally relevant topics that many of us are all too familiar with; love lost, mental illness and addiction. This album is “part autobiographical [and] part fiction. It’s an honest look at coping with emotional turmoil, and the doubt, anxiety and heartbreak that comes with navigating relationships and losing a loved one.”

The album begins with “Loss of Mystery”, a catchy, upbeat tune that will definitely capture the attention of the audience. The addition of backing vocals is a great touch. I also loved how they didn’t drag the song out. Instea,d it is a little on the shorter side, which is a great tactic to keep us wanting more.

“Handshake Deal” was released as a single over the past few months. The lyrics to this song share a tale of a love story that was never meant to be, evident through the lyrics “but babe your love is just another handshake deal.” Although Steele sings about being in and ending an unhealthy relationship, the tune is definitely an upbeat one (which you definitely would not expect when reading the lyrics). Even though we are so unsure when in such situations, Steele is the epitome of confidence in this track.

“It Won’t Happen Again” is definitely a tune I can see people dancing to. With its creative riffs and melodies, I couldn’t help by tap along as I listened. Steele sings about ending relationships and how we can get played, something that many can relate to. We always say that we will only be fooled once but that is not always true.  “Well I don’t scare easy, I don’t fall apart. There’s room for another girl to get this heart. Fool me the first time, it’s all my fault. Cause you opened the wound, you pouring in the salt.” I can confidently say this is my favorite track on the album.

“Hurricane” is the last track on the album .This one has a darker, heavier feel than most other tracks. When we see the word hurricane we think of a storm. Many storms in our lives sneak up on us. The title of this track fits right in with the creative sounds, as they use spaces to accent the lyrics and provide separation between different parts of the song. Just like many storms sneak up on us before they begin, the melody grows with intensity before the hurricane finally hits.

Steele added an extra personal touch to the album by exploring events in his life. According to Steele, “for this record, we put together a set of songs that captured how unexpectedly dramatic my life had become from the time before my mother’s death in 2014 until right before things started looking up again. I wanted to pay it forward for all the songs that got me through those strange, heavy times.”

Half Girl Half Ghost is an album that you definitely won’t want to miss. With its catchy riffs and relatable lyrics, it “also illustrates the importance of feeling alive, putting old worries aside and simply having fun.”

Matt Steele & The Corvette Sunset will officially debut Half Girl Half Ghost at Halifax’s Seahorse Tavern tonight (June 7th).  If you’re in the area be sure to check it out!