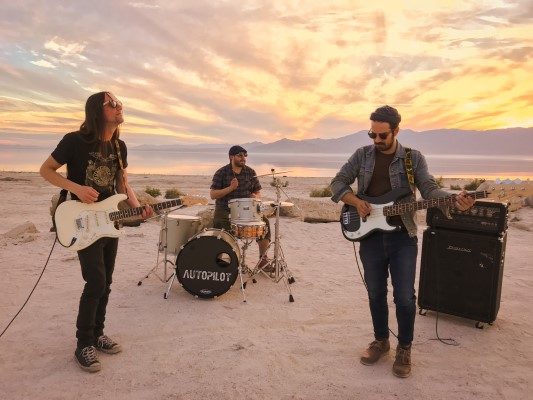 Saskatoon’s alternative rock band, Autopilot have released 3 full-length records and one EP and will be releasing their highly anticipated album, Afterglow this year.

Today, we are happy to share with you the video for their newest single, “Weightless” which was done by director, Jared Peace.

When asked about the video, the band shared,

“We found ourselves with an unexpected day off on tour in the California desert. With director Jared Peace along shooting the video for Weightless, we headed to Salvation Mountain. As we passed by the Salton Sea, we saw the most amazing sun setting over the mountains. With only 10 minutes before dark to shoot, Jared was able to capture the feeling of the song along with what it’s like to be on tour.”

Check out the video below and find out more about Autopilot in our newest segment of Five Questions With!

My name is Marlon. I play guitar and sing in the band Autopilot.

Many people describe our music as alternative rock or indie. The thing we try to accomplish as a band is to put out catchy music that means something to us.

The upcoming album Afterglow was a collaboration between producer S.J. Kardash and myself. The main focus was on the songwriting and I wanted this to be the best record Autopilot was capable of making at the time. We wrote about 80 different ideas for the album and took the ones we liked the most. For this record, most of the music was written first, before the vocal melodies and lyrics. At the beginning process of writing the album, I had about 20 song ideas on my phone but lost them after I dropped my phone in the water and hadn’t backed it up. That was a hard lesson to learn.

We just finished a US Midwest/Northeast tour for the release of the single Weightless. We are capping off that tour with a show at The Capitol in our home city of Saskatoon on June 15th.   A Canada/US tour out West is in the works for the fall.

I’d describe our live show as high-energy. We have some spacey parts with the violin bow on the guitar and lots of delay. Playing live is a very big part of the band next to writing and recording the songs themselves. We spend about 4 months on the road every year. As a band we really feel playing the music live and touring is still one of the best ways of getting our music to new people.

I think it would be Weightless. We were really excited to release the single a few weeks ago. I’m also pretty stoked for the next single coming in a few months called Living Dead. More pop hooks than the title would suggest.